A Nuns on the Bus Lesson: Community, The Dream and The Way

September 12, 2016
No comments yet
Daughters of Charity of St Vincent de Paul, News 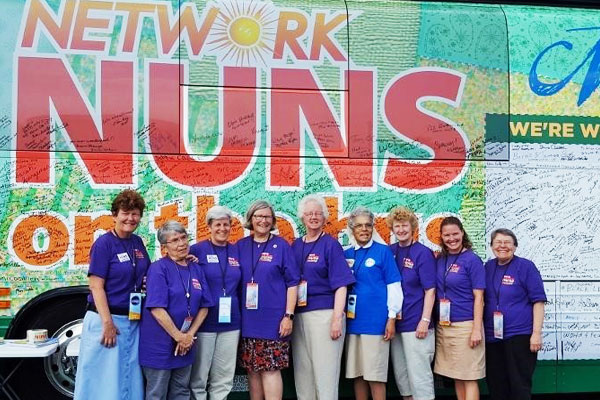 NETWORK’s Nuns on the Bus is a proactive group of Catholic sisters who advocate for Mending the Gaps in income and wealth inequality in the United States through policies and political reform. Read their 2020 Vision: Mend the Gaps here.  The goal of their most recent bus tour was to bring a politics of inclusion to divided places, change the conversation to mending the vast economic and social divides in the country, and counter political incivility with a message of inclusion. Sister Mary Ellen Lacy with the Daughters of Charity wrote this reflection from her time on the bus:

Recently, the Nuns on the Bus wrapped up its fifth tour. I have enjoyed the privilege of riding on 4 of the 5 tours. While each bus tour shares many commonalities, each one creates new windows into the hopes and struggles of the people we meet. This year we focused on mending the gaps of society, including voting and tax inequities as well as the disparate access to housing, democracy, healthcare and citizenship.

We visited all-encompassing healthcare facilities, day care centers, immigrant service providers and recovery programs fit for The King. We held our own brand of caucuses, wherein we discussed the gaps in that particular community and asked the participants to envision a society that has already mended those gaps. While in Cleveland and Philadelphia, the National Conventions were underway and we engaged the delegates, passersby and members of congress in dialogs of hope. Significantly, we found the similarities in belief and hopes to cross the aisles. I joined the bus in Toledo, on the day prior to its arrival in Cleveland, the site of the Republican National Convention.

We served lemonade to people on the streets of Cleveland and asked them about their fears and hopes for the future. The folks I spoke to wanted everyone to have a fair shot at a good life. Some spoke of their fear of increasing violence and their second Amendment rights. A police officer with whom I spoke postulated that guns, in responsible citizens’ hands, would promote peace. In the end, most said they would back ‘their guy’ in the general election but they did not say it with overwhelming pride. Perhaps because the Republican nominee had been presumptively nominated weeks before, the excitement and energy levels seemed relatively tame during our visit.

The programs we visited on the road, often spearheaded by religious communities, were designed to lift people out of poverty. As one would expect from a religiously run organization, every program was high quality and showed reverence for those they served. What grabbed me this time around was the consistency of comradery and community experienced in these successful organizations. They were not doing unto the Poor. No, the more remarkable agencies had designed and implemented systems that allowed those they served to guide the direction the programs would take. Some organizations listened to their needs and took issues to their Boards; other organizations hired those they served to keep it real and advance the success of the folks they served; still, others held regular meetings with all the community shareholders. The people living in poverty were co- creators in these community programs and the communities were working to enflesh their dreams of a just society. People will amaze you if you let them.

The caucuses were usually held in the evening and were comprised of more economically secure people of the area who cared deeply about those who were being left behind. The idea of having people envision a world without gaps and disparity was biblical. In Cleveland, we started the second leg of the tour with an ecumenical prayer service that focused on Ezekial’s dry bones. Today more than ever, we, as a community of believers, need to walk amongst the dry bones of dimming dreams and breathe new life into them. People will fairly easily recite a litany of economic struggles and social gaps. Many are willing to postulate, with emphatic certainty, what others should do to fix this broken world. It is more difficult to envision and talk about a world that has already arrived. Yet, that is what we asked them to do because we sensed a need to talk about it, to breathe life into it, before we could once again believe that it is possible. In sharing stories of positive local activities and the need to be good neighbors, we feed the fires within those who might hear us so that we may speak the dreams into existence. Their group visions revealed that good community will create more good community. As we rode on, it became more and more apparent that good community was The Dream and The Way. And we met plenty of dreamers willing to walk The Way.

Our last stop was Philadelphia, the site of the Democratic National Convention. We, again, provided lemonade ministry and asked passersby about their fears and dreams for the future. Interestingly, just like the folks we met in Cleveland, they envisioned fairness and opportunity for all. None spoke of the need for gun rights but fears of continued racism and violence surfaced again. One Bernie supporter, Heidi, openly wept as she spoke to me. She told me that she knew that she would ultimately vote for the Democratic candidate; but she wasn’t quite ready to accept that reality yet. Still, others cheered the nomination of the first woman nominee of a major political party.

We attended the Convention Center when Bernie conceded. He was so humble, so classy and so statesmanlike that I could understand why Heidi cried. Despite the tears of the passionate and youthful Bernie supporters, or because of them, the Democratic Convention seemed electrified and engaged.

As I departed the bus to go to my Provincial Assembly, I made certain I packed a souvenir. It was a poster we received at one of the Conventions. It said, “Thank you”. We receive so much more than we give on these tours.

Written by Sister Mary Ellen Lacy, Daughters of Charity – Province of St. Louise.  Join the Sisters of Charity Federation members on Tuesday, September 13th for a day of prayer and fasting for wisdom and discernment as the U.S. moves toward the national elections. 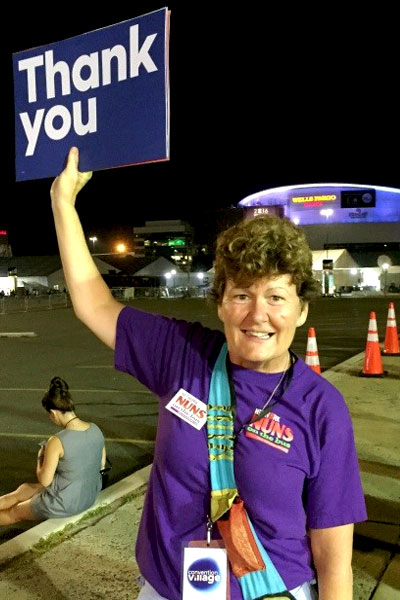 Your ticket for the: A Nuns on the Bus Lesson: Community, The Dream and The Way

A Nuns on the Bus Lesson: Community, The Dream and The Way