Sisters call for prayer and fasting leading up to U.S. Elections

The Sisters of Charity Federation members at their recent meetings committed themselves to joining in prayer and fasting for wisdom and discernment as the U.S. moves toward the national elections. As a Congregation, and as a collective of Congregations, we feel impelled to enter into deep prayer for all of the electorate, the candidates (national, state, and local) and those who govern. We call all Sisters and Associates to join in prayer and fasting the 2nd Tuesday of every month beginning on July 12th, and in the months leading up to the November 2016 elections.

We extend this invitation to those of all faiths to join us in prayer. We pray that all of us, including our leaders, experience a strong desire to work for the common good of all peoples, especially the most vulnerable. We pray that together, we move through the election process with respect, compassion and in a non-violent manner with a reverence for all persons and their beliefs.

We are offering up prayers, and ask that others join us, because we echo the Pope in his belief that as people of God, one of the gifts that we can offer those who govern or seek to govern, is prayer. The Pope has also stated that according to the Social Doctrine of the Catholic Church, politics can be viewed as one of highest forms of charity, because it serves the common good.

As women religious, prayer is at the very core of whom we are as servants of God, and prayer is part of every aspect of our lives, and that includes praying for our world, our country, all citizens, and those who govern.
We pray in thanksgiving for the privilege and responsibility of being able to organize as individuals politically. We pray that each of us, as citizens, feel compelled to exercise our right and responsibility to vote. We pray for all to make decisions and vote based on their conscience. We pray for leaders who will make decisions for the good of all, especially the least among us. We pray that God will protect all candidates and their families, and give them strength and wisdom. We pray not just for the candidates but all leaders and for the nation. We pray that the candidates who are voted into office will act as “servant-leaders.” 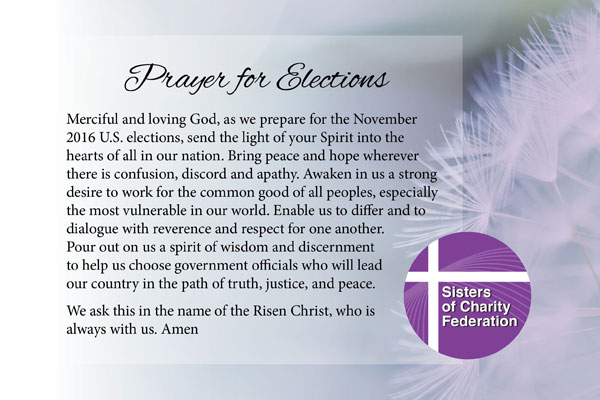 Your ticket for the: Sisters call for prayer and fasting leading up to U.S. Elections

Sisters call for prayer and fasting leading up to U.S. Elections