A Chance Meeting with Mother Teresa

September 4, 2016
No comments yet
News, Sisters of Charity of Leavenworth

In September 1997, Sister Therese Bangert of the Sisters of Charity of Leavenworth wrote the following reflection on her accidental encounter with Mother Teresa of Calcutta almost 30 years earlier (March 1969). As Mother Teresa is canonized in Rome on September 4, this remembrance captures the simplicity characteristic of her life and ministry to the poor and vulnerable:

“With all the talk of Mother Teresa these days, I have found myself relating my story of her visit to us at Visitation Parish, Los Angeles, California many times over.

One afternoon after school, the Sisters received a call at our home from the airport. The person calling said that there was a Sister at the airport who was traveling to South America. Her flight did not leave until the next morning, and she would like to spend the night with a community of Sisters. Since we were close to the airport, the caller reached out to us.

One of the Sisters living with us at the time wondered aloud as we spoke of going to get this woman, “How were we going to know whether or not she was bogus?!” A bit of irony! Anyway, two of us went to the airport and brought the traveler to our home.

It must have been near dinnertime as my first memory of our guest is of her sitting at the table in our dining room. I remember how my mind and spirit marked the moderation and reverence with which she ate the food that was on our table. I remember that she talked freely with us and that we drank deeply of her stories of the large number of women in formation in the Missionaries of Charity. We also drank deeply of her stories telling about how that community depended completely on Divine Providence.

I remember how I noted her hands and her feet. I cannot put into words the attraction, but somehow they were a meditation – thinking about whom her hands had touched and where her feet had walked. Her hands and feet were worn but beautiful in their wear.

Because it was Lent, there was an evening Eucharist at St. Jerome’s [Parish]. We took our guest to that church for evening Mass. After Mass, Mother Teresa requested that we take her to see the poor.

I was a young Sister in those days, and I have no idea how the conclusion was reached to take her to our Saint John’s Hospital in Santa Monica – another irony considering her request. [A Sisters of Charity of Leavenworth Health System hospital at that time, Saint John’s served people of all means, among them movie stars and celebrities as patients and benefactors.] But we traveled to Saint John’s and got on the elevator and ascended to the Sisters’ quarters. When the elevator door opened, Sister Joellen Stimac happened to be in the hall, and she gasped, “Mother Teresa!”

We all gasped in amazement that she knew who this was. Sister Joellen continued, “I just read about you in Look magazine.”

We went into the community room at Saint John’s, and there was some talk that we should call the Cardinal. For whatever reason, (I think Mother Teresa requested that we not call) that was never done and after what I remember as a brief time, we brought Mother back to Visitation.

The next morning she celebrated Eucharist with us. Then Sister Jean Monica (Mary Kempter) and I took her to the airport. I got out of the car with Mother Teresa and asked her if I could hug her. . . and I did.
Sister Jean Monica and I returned to school in time for the beginning of the school day. When the first graders and I were all in the classroom that morning Cathy Wagner asked in her characteristic bright way, “Sister Therese, what happened to you?” And I responded, “I just met this most wonderful person.”

My overwhelming experience of Mother Teresa was that THE HOLY SPIRIT just oozed out of her!
As I have grown in ‘wisdom and age,’ I have most admired her total leveling of all persons, treating all with equal respect and dignity – her eyes that have shown us how God sees each of us. Now, I ask her intercession for the gift of that sight.” 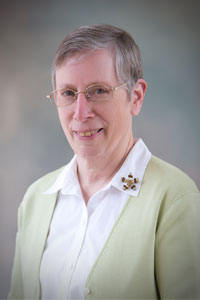 Your ticket for the: A Chance Meeting with Mother Teresa

A Chance Meeting with Mother Teresa