September 2, 2016
No comments yet
News, Sisters of Charity of the Immaculate Conception 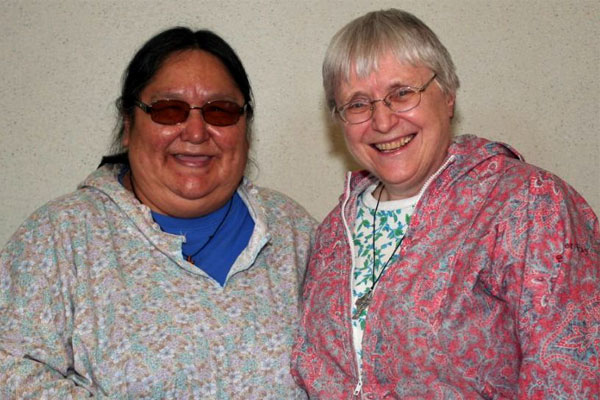 Through awareness, advocacy, prayer and ritual, Sisters of Charity of the Immaculate Conception (SCIC) and Associates seek to participate in the process of healing and reconciliation with Canada’s Aboriginal peoples. Aboriginal refers to Indigenous peoples as well as Métis peoples who are of mixed Indigenous and European ancestry.

A 2015 report from the Truth and Reconciliation Commission of Canada (TRC) confirmed that many Aboriginal peoples’ lives were disrupted and scarred by seven generations of government-sponsored residential schools administered by churches. Through attempts at assimilation into European cultures and western Christianity, Aboriginal children were torn from their families and denied the right to speak their language, follow their ancestral wisdom and cherish their identity. They suffered various forms of abuse which devastated them, their families and communities for decades.

During a gathering on August 11 held in conjunction with the World Social Forum in Montreal, Canadian Senator and former TRC chairperson Murray Sinclair said that commitment to reconciliation between Canada’s Aboriginal peoples and other citizens is vital for Canada’s children and grandchildren.

“Reconciliation belongs to each and every one of us,” said Senator Sinclair. Although it is “going to take generations,” reconciliation is “not a spectator sport” and requires action now, he added. Read more about his speech here.

SCIC and Associates are attentive to initiatives to promote healing and reconciliation by Canada’s Catholic Bishops, the Canadian Religious Conference and KAIROS (Canadian Ecumenical Justice Initiatives). One SCIC and three Associates participated in TRC community hearings in western Canada. Some western Associates created and donated prayer shawls as members of the Catholic Women’s League of Canada. Some SCIC have participated in the KAIROS Blanket Exercise — an interactive learning experience raising awareness about the Indigenous rights history we are rarely taught. We have also signed petitions urging provincial governments to follow up on TRC report recommendations, notably as these relate to education. SCIC and Associates also urged our federal government to establish a long-overdue inquiry and are grateful the current government has now launched the National Inquiry into Missing and Murdered Indigenous Women and Girls.

Some SCIC participate in traditional circles, ceremonies and creative initiatives with Aboriginal and other people. Some also participate in drumming circles demonstrating solidarity and seeking equality, healing and hope. Some SCIC and Associates attend presentations by Aboriginal leaders, elders and clan mothers. We express our support for — and join efforts to raise concerns about — extractive industries and pipeline companies on Indigenous ancestral territories. In solidarity with Indigenous peoples in Canada and Peru, SCIC and Associates have participated locally, nationally and internationally (at the United Nations and World Social Forum) in gatherings to learn about and protest against harmful effects of mining and fracking.

Today we are committed to grow in understanding, seeking an informed, peaceful, respectful and just relationship with Canada’s First Peoples.

Your ticket for the: Seeking Healing & Reconciliation with Indigenous Peoples