Sisters of Charity Federation > News > News > Who will be the next Secretary-General of the UN?

Who will be the next Secretary-General of the UN? 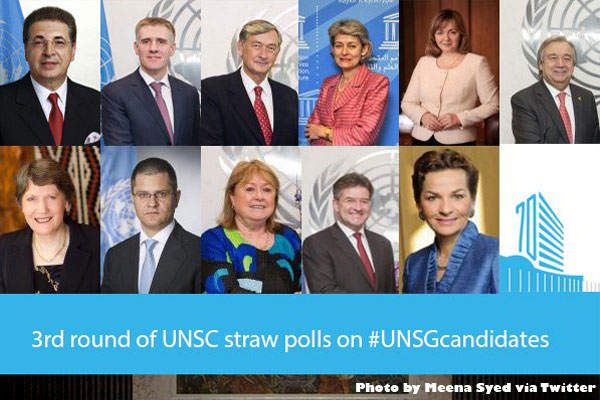 The United Nations is now 70 years old: What kind of person would we like to see as the next Secretary-General (SG) of the United Nations? The SG’s role is to be “equal parts diplomat and advocate, civil servant and CEO. The Secretary-General is a symbol of United Nations ideals and a spokesperson for the interests of the world’s peoples, in particular the poor and vulnerable among them.” According to the regional rotation plan that the UN follows, the next SG should be from Eastern Europe. The current list of SG candidates goes beyond the region and there is great expectation that the world will see a woman Secretary-General in January 2017.

The Practice Until Now

In years past, candidates were nominated by government based on regional rotation. The Security Council agreed on a nominee in private, after a lot of secret bargaining and made a recommendation to the General Assembly. The General Assembly in turn, merely confirmed the nominee by a majority vote. Often a candidate’s nationality has proven as important as his qualifications. Besides that the veto-wielding five permanent members – Great Britain, China, France, Russia and the United States, of the Security Council hold the key to the process.

There is a feeling among the member countries that the current process is unsuited to choose the best possible candidate to lead the UN. Pressure had been building up for a more open and inclusive selection process from various groups and international institutions.

A campaign for a better process by 1 for 7 Billion, supported by 750 organizations and individuals from around the world with a reach of 170 million people have been advocating to ensure the best candidate is chosen to face the challenges of our times and bring peace, security, dignity and prosperity for the seven billion people, while maintaining sustainability to people and the planet. The Campaign proposes a more “open and inclusive selection process that engages all Member States, could give future Secretaries-General a stronger mandate… to revitalize the UN, enhance its effectiveness and credibility, as well as reaffirm its global authority and popular appeal.”

In the absence of a job description and comprehensive selection criteria, the Campaign placed a ten point reform recommendation for the selection process to promote equality, diversity, gender parity and transparency:

In an open letter, the staff members of the various UN departments and agencies have stated the need for “the very best of candidates” to be selected, “for the decisions of the next Secretary-General will be fundamental in the life or death of millions of people, and in global peace and security, development and human rights…”

The Women’s Major Group, along with women from around the world have been calling for the Security Council to recommend a woman candidate, to bring a feminist perspective to sustainable development, peace and security and “address the global structures, systems and values that undermine gender equality, women’s rights that stand in the way of transformative development justice.” They ask, “How can the UN uphold gender equality when its leadership does not?”

In response to the appeals and recommendations from various quarters for an open and inclusive process, the President of the General Assembly and the President of the Security Council took steps to make the process open and transparent. In December 2015 the President of the General Assembly had requested all Member States to present candidates “with proven leadership and managerial abilities, extensive experience in international relations, and strong diplomatic, communication and multilingual skills.” In order to guarantee equal opportunities for women and men, he encouraged Member States “to consider presenting women, as well as men” for the position.

From April 12- 14, 2016, the world witnessed history being made at the 70 year old organization – Informal Dialogues with candidates – for the position of the next Secretary-General of the United Nations, open and live telecast for anyone around the world to follow. Each candidate had a two-hour period to present their vision statement, which addressed the challenges and opportunities facing the UN, followed by questions from member states and civil society.

In a way this was a revolutionary move for an organization that is very bureaucratic in its function, and gave the General Assembly an opportunity to assert itself and establish a new standard for transparency and inclusivity in decision making. A small improvement!

Since the last UN Debate, moderated by Al Jazeera on July 12, the Security Council has held two ‘straw polls’ that encourage or discourage the candidates. From the leaked results of the straw polls, hope for a woman Secretary-General is still alive, with Susana Malcorra in third place and Irina Bokova in fifth place.

In light of what has taken place, one could say that the ongoing selection process has been the most open and transparent, in a way revolutionary for an organization that is very bureaucratic. It gave the General Assembly an opportunity to assert itself and establish a new standard for transparency and inclusivity in decision making.

-Written by Sister Teresa Kotturan, Representative to the UN for the Sisters of Charity Federation

As representative of the Civil Society, I was privileged to ask a question to the SG candidates, during the UN Debate moderated by Al Jazeera on July 12. You can view the entire debate in the link here: https://youtu.be/EkhtglT0uKU

Your ticket for the: Who will be the next Secretary-General of the UN?

Who will be the next Secretary-General of the UN?