The 35th Anniversary of the Martyrdom in El Salvador

April 5, 2016
No comments yet
News, Sisters of Charity of Cincinnati 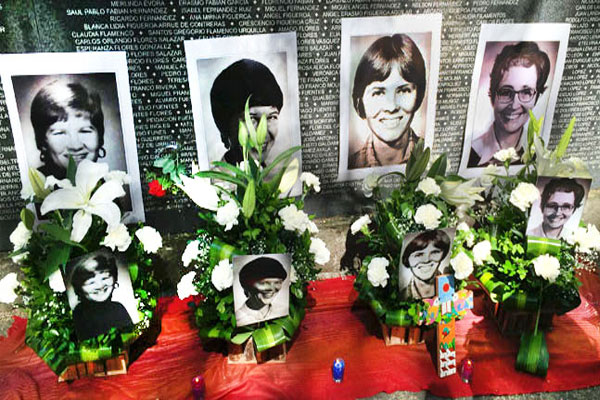 As 35 years have gone by since the tragic martyrdom of four churchwomen in El Salvador, memories of the country remain vividly alive for Sister Christine Rody, Sisters of Charity of Cincinnati, who went to minister there with her students in mind.

“I was teaching high school religion,” remembers S. Christine, “and I was teaching a course on the Church. And, the concept of the Church being a world organization concerned with the world—that’s what I wanted to convey. I didn’t want it to just be Church history.”

She herself had connected with the world while growing up in Cleveland. Her father, a crane operator on Lake Erie, always told her about the foreign ships that he helped to load and unload. Furthermore, she had corresponded with a pen-pal in Bombay, India. She knew that she could connect her students to the world if she could only bring it to the classroom. That was when she looked to the Cleveland Mission Team, which had been ministering in El Salvador since the 1950s; she arrived there in 1976.

“Our role as the women on the team was instruction, getting the teachers trained, getting the Caritas [a food assistance program] ladies new ideas, and so on,” remembers S. Christine of her ministry, which included the three major Salvadoran cities of La Unión, La Libertad, and Chirilagua. The main idea was to give food to residents in the directivas (villages) in exchange for a promise that they would continue to provide educational opportunities to their villagers through the teachers the missionaries had trained. The generation of adults who were quite eager to send their children to school, because they had not had the opportunity to learn how to read or write themselves, were the main educational target. Other duties of the missionary included evangelization and teaching social skills.

In discussing the Cleveland Mission Team’s motivations, S. Christine pointed out the glaring social divide in the country: “There were schools for the rich—Catholic institutions, and so on—but the poor in the campo [countryside]—nobody was teaching them about anything. And often, because the priests were responsible for main churches, they never even got out to villages, because they didn’t have personnel.”

As soon as one begins missionary work in El Salvador, the distance from Cleveland, from the United States, becomes very apparent, particularly in terms of the weather. “We used to laugh and say there were two seasons: hot and dry, and hot and wet,” S. Christine recalls. During the months of May through September, it would rain constantly, particularly in July and August. Whereas during the dry season the main concern was keeping their living space free of dust, during the wet season the Sisters had to worry about attacks of mold—brought on by the excess moisture—which affected the local paper currency they carried, as well as anything leather. S. Christine also remembers her visits to the villages on the beach, where sand fleas attacked her ankles. Despite all of the hazards, however, S. Christine liked living in El Salvador: “It was nice; no winter!”

In 1980, S. Christine was living with two other members of the Cleveland Mission Team: laywoman Jean Donovan and Ursuline Sister Dorothy Kazel. By 1979, the violence that had already been present in the country for the past few years intensified, and a civil war was underway. It had become too dangerous to venture out into the villages, so S. Christine became involved with a refugee center in San Roque at the request of the Maryknoll Sisters. The facility was a church basement filled with 120 people (eventually that number doubled) who had been misplaced by the political upheaval. Two Maryknoll Sisters had come to stay with the missionaries, and two more Maryknolls were on the way: Sisters Maura Clarke and Ita Ford. S. Ita had taken on an activist role by speaking out against the country’s violence through direct confrontation with the commandante himself. Every time he initiated a raid on a village, she would rebuke him for murdering his own countrymen. S. Christine believes this may have been the reason why, when Jean and S. Dorothy picked up Sisters Ita and Maura at the airport on Dec. 2, 1980, the four were taken in by the military for questioning (though to this day nothing is certain about what motivated the roundup).

“[S. Ita] would challenge the commandante,” S. Christine says. “They got tired of it, and somebody issued an order …” After 45 minutes of questioning, the women were taken out to an obscure finca [a piece of farmland], assaulted, and shot to death.

The murder of the four women called to mind the assassination of the similarly beloved Archbishop Oscar Romero, which had occurred just months before. At his funeral, S. Christine and her fellow missionaries had gotten to stand vigil near Archbishop Romero’s coffin as a part of the honor guard. But on the morning of the funeral for S. Dorothy Kazel in Cleveland, Ohio, S. Christine and the other missionaries were called into an important meeting with newly appointed Bishop of Cleveland Anthony Pilla. He asked them two important questions: “What do you think about Cleveland’s missionaries going back?” and “What do you think about your going back?” Everyone unanimously wanted to return.

S. Christine remembers that “some of the deepest faith statements” she ever heard were issued at the meeting: “When we went down as missionaries,” a priest had responded, “we went down with this idea that we’re going to bring the faith, and we’re going to help people understand. And now we’re faced with the reality of being a missionary: to stand with the people.” But S. Christine, as much as she wanted to go back, knew that it just wouldn’t be safe, because if there was a hit list, her name was next. “If they killed me, they wouldn’t have only killed me—they would have killed anybody who was with me. They just wipe out whoever you are with. Then I would be responsible for the death of all of these people, and it would have been the end of the Cleveland Mission.”

After attending the funerals for the women, in addition to S. Dorothy’s funeral in Cleveland, she attended Jean Donovan’s in Florida; Sisters Ita and Maura were buried in El Salvador. S. Christine returned to El Salvador to say goodbye and to celebrate Christmas with the mission team one last time.

On Dec. 2, 2015, the tragic events of 1980 were commemorated through a delegation hosted by the Salvadoran Humanitarian Aid, Research and Education (SHARE) Foundation and the Leadership Conference of Women Religious (LCWR) in El Salvador. One of the women present at the delegation was S. Louise Lears.

“For years I have read about the women who were murdered in El Salvador, and participated in prayer services of remembrance, or rituals of remembrance,” S. Louise relates. “I felt called to stand in those places and to be in those places, and to hear the people talk today, to hear how their legacy is being carried forward.”

The events included visits to the National Cathedral and the crypt of Archbishop Oscar Romero, and a ceremony at the martyrdom site, which was declared an historic site by the Salvadoran government. Of the ceremony, S. Louise shared her surprise: “I didn’t realize that it would be such a community celebration – 117 in the delegation, and then, so many others! I don’t know what I expected, but I hadn’t anticipated that. The feeling of community there was astounding.”

S. Nancy Crafton, another participant in the delegation, returned to El Salvador after visiting it 10 years ago. As S. Christine saw when she ministered in the villages, S. Nancy also observed today that the poverty in the country is still extreme: “The people still have dirt roads, and very little interchange with the large cities.”

S. Nancy remembers at the time of the martyrdom feeling “complete shock and horror,” and also disbelief that the United States government at the time denounced the churchwomen as having been involved with the leftists; then, S. Nancy relates, the foreign policy was to fight communism by supporting “dictatorship[s] of brutality.” In coming to El Salvador this year, she, like S. Louise, was touched by the Salvadoran women whom she got to dialogue. “The women are wonderful examples of the ability to survive, and to come forth with their strength,” S. Nancy says. However, as the violence transitions from death squads and civil war to brutal gang violence, she is concerned for the millennials in the country, who “don’t have the same understanding of the wars or the massacre” that their parents do. The strength and capacity for remembrance that the past generation possesses may be necessary to instill in the new, due to the constant threat these gangs pose on Salvadoran lives. The women of the delegation themselves were always surrounded by heavy security, and were forbidden from going anywhere unaccompanied.

Despite the ominous threat of violence that always seems to loom over the country, S. Lois Jean Goettke, another Sister of Charity present in the delegation, noted that the Salvadorans do not despair. “Hope is their driving force—hope in God, mainly, hope in each other, and hope in their hearts for life that it can change,” S. Lois relates. She recalls going to the site where S. Carla Piette, a member of the Cleveland Mission Team, had tragically drowned a few months before the martyrdom. Countless people stood there in her memory, with their lanterns illuminating the impenetrable darkness of the Salvadoran night, chanting and singing. Following that, the Salvadorans who lived nearby had prepared a feast for the delegation. “It was just phenomenal! We were 117 people—that’s a lot of people to feed!”

The hope that S. Lois observed within the Salvadorans was ever-present in these beautiful and joyous celebrations. The prevailing attitudes of festivity, hope, and remembrance seem essential to the peace and healing that has been desired for so long.

Your ticket for the: The 35th Anniversary of the Martyrdom in El Salvador

The 35th Anniversary of the Martyrdom in El Salvador