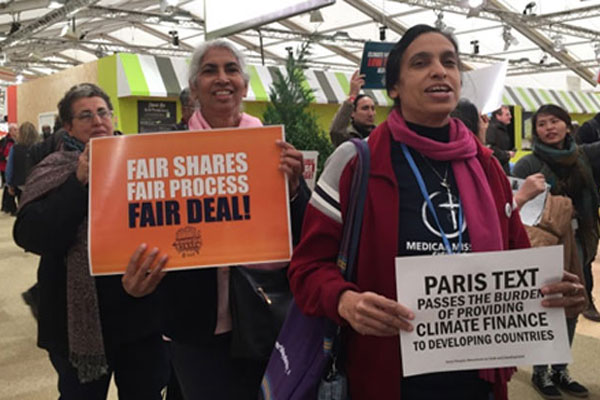 “The climate is a common good, belonging to all and meant for all. At the global level, it is a complex system linked to many of the essential conditions for human life. A very solid scientific consensus indicates that we are presently witnessing a disturbing warming of the climatic system […] Humanity is called to recognize the need for changes of lifestyle, production and consumption, in order to combat this warming or at least the human causes which produce or aggravate it.” – Pope Francis, Laudato Si’, On Care for Our Common Home (23)

The signing event will take place next Friday, April 22nd at the UN Headquarters in New York, on the first day the agreement will be open for signature, which coincides with the observance of International Mother Earth Day or Earth Day. It is an occasion to engage the world leaders to put the new agreement into action.

“This Agreement shall enter into force on the thirtieth day after the date on which at least 55 Parties to the Convention accounting in total for at least an estimated 55 percent of the total global greenhouse gas emissions have deposited their instruments of ratification, acceptance, approval or accession.” Article 21 of Paris Agreement

On December 12, 2015, 195 countries made an historic agreement to take concrete steps to limit the global temperature rise to below two degree Celsius and work for a sustainable future. According to Christiana Figueres, Executive Secretary of the UN Framework Convention on Climate Change (UNFCCC), it is a “date when cooperation, vision, responsibility, a shared humanity and a care for our world took center stage.” She also added, “We have made history together. It is an agreement of conviction. It is an agreement of solidarity with the most vulnerable.”

The Paris Agreement does recognize the social, economic and environmental dimensions of climate change and the global response to the threat of climate change will be undertaken in the context of sustainable development and efforts to eradicate poverty.

The following were some of the demands from developing countries and civil society:

Adequate funding for mitigation and adaptation: The Agreement will enhance the ‘capacity and ability of developing countries, in particular the least developed countries, and those that are particularly vulnerable to the adverse effects of climate change, such as small island developing States, to take effective climate change action, including, inter alia, to implement adaptation and mitigation actions.’ (Mitigation – actions to limit the magnitude or rate of long-term climate change by preventing greenhouse gas emissions through renewable energy, halting deforestation and other actions. Adaptation is the adjustment that society makes to prepare for, or adjust to climate change.)

Provision to shield national climate actions from investor-state dispute settlement (ISDS) challenges, through the “free-trade” agreements – in the past Corporations have challenged governments over 600 times and most of them are related to environmental decisions by governments. The agreement fails to include this protection from ISDS challenge.

The agreement has achieved a very delicate political balance while reaching for greater climate mitigation and sends a strong signal for a carbon-constrained future to the economic world. This is at the cost of ambiguity in the pathways for achieving such ambition and consequently it overlooks the important issues, such as climate justice and ethics, and leads to an uncertain future.

The next five years are critical to Paris Agreement, before it comes into force in 2020; all countries, especially the developed countries that have made inadequate climate pledges, need to review their national mitigation plans to scale up climate action.

The Agreement “welcomes the efforts of all non-Party stakeholders to address and respond to climate change, including those of civil society, the private sector, financial institutions, cities and other subnational authorities…” It is our duty to hold to our governments accountable to the commitments they have made and to ask them to sign and ratify the agreement.

Above all we need be aware of our own impact on climate change and change our lifestyles to reduce our carbon footprint.

Your ticket for the: World Leaders Invited to Paris Agreement Signing Ceremony