March 12, 2018
No comments yet
News, Sisters of Charity of Cincinnati 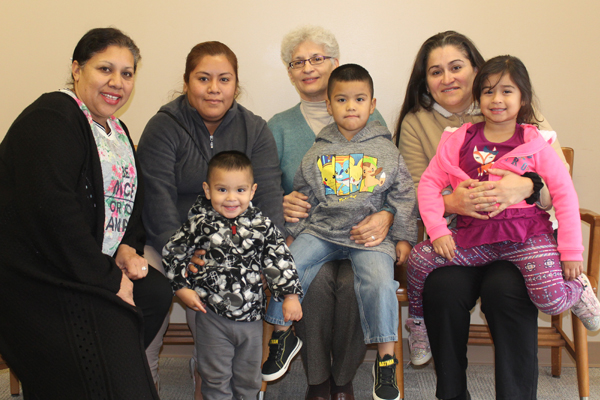 In this year of action and awareness-raising for Pope Francis’ Share the Journey campaign, Sister of Charity Juana Mendez stands as an example of an open mind and heart to the migrant. A native of Puerto Rico, S. Juana says she “knows what it’s like to move to this unknown world where you don’t know what’s going to happen.”

As a child growing up in Puerto Rico, S. Juana recalls her family lived in poverty in Puerto Rico. “I felt when we moved to the U.S. that we were rich because we moved into an apartment with electricity; we didn’t have electricity or running water in Puerto Rico,” she said. “My mother was a very brave woman; she was always very positive. She never gave up. We struggled a lot, there were many times that we didn’t have food; yet, she managed to have a little piece of bread for each of us to eat. She was always looking for different avenues to feed us, or to put a roof over our heads.”

S. Juana entered the Sisters of Charity of Cincinnati community 20 years ago. As a young girl she said she felt a call to religious life, but instead married and had three children (two daughters and a son). It was after her children had grown and she was no longer married that she once again felt religious life calling. S. Juana says she was drawn to the Sisters of Charity Community through her friendships with Sisters Ann Dorenbusch and Florence Cremering, and before long she found herself entering the Community in August 1995.

For the last 18 years, S. Juana has ministered for the Diocese of Covington, Kentucky. She is currently the Hispanic diocesan minister. While she says she wears many hats, she mainly concentrates on immigration work, helping people adjust their status in the U.S. As a Board of Immigration Appeals (BIA) representative for the Department of Justice she is given accreditation through the diocese to practice immigration law. In addition, Sister is the parish administrator at Cristo Rey parish in Erlanger, Kentucky, where she has created many new programs and classes, including English as a Second Language and GED courses.

“The people I work with are mainly from Mexico and a majority don’t have documentation,” S. Juana explains. “It is so meaningful to see people go from feeling as though they are no one to having a status, if you will, here in the U.S.”

She provides a listening ear and compassion to many who feel alone, and scared, and don’t know what the next day will bring. “In my opinion, when you neglect someone, they feel as though they are no one,” S. Juana says. “I remember many years ago knocking on the door of a parish in Cleveland wanting help, my need was financial. The person I spoke with was a Sister, who said to me, ‘We’re not able to help you, you will have to go somewhere else.’ Boom, she closed the door. I felt as though I was no one. I wasn’t even invited into the convent to see why I needed money, or to look at options – other than financial – to help me.

“I think when we neglect to sit and to listen to others, there is the potential for them to turn away and to go someplace else for help. And, oftentimes, they will go to the wrong place. It’s sad because it does happen. That’s why every person who walks through my door, I make sure I listen to them. I don’t want them to feel like they are no one. They want someone who will listen to them, embrace them, and to look at ways to help them out.”

And while the ministry has its many ups and downs, the joy she experiences at times is incredibly rewarding. “It feels like I won the lottery!” she smiles. “I’m so happy when I see people happy. A lot of people are out there trying to find ways to find joy, but they don’t realize that we already have it, especially in each other. I feel that if I make you happy, that makes me happy. I couldn’t ask for more. Ever since I was young I was looking for ways to help others and to make them happy. I don’t worry about me, I worry about the other person. Even today, I could have a doctor’s appointment, and a person walks in and tells me they need help, and I would cancel my appointment to help them. It’s what they need and what makes them happy that makes me happy.”

Story by Erin Reder and submitted by the Sisters of Charity of Cincinnati.  Happy National Catholic Sisters Week to Sister Juana Mendez!

Your ticket for the: NCSW Spotlight: Sister Juana Mendez, Sisters of Charity of Cincinnati