March 11, 2018
No comments yet
News, Sisters of Charity of New York

It’s safe to say that no other Sister of Charity has a resumé quite like Sister Inez Mela: elementary and high school teacher, principal, college professor of Italian – and dollhouse maker!

Over the years, Sister Inez has carefully built and meticulously furnished several dollhouses since the first one she created for Elizabeth Seton Academy in 1979, where she served as principal for four years. Most of her creations have directly benefited Catholic education, since she has donated them as prizes for raffles to raise funds for various schools.

Most recently she created a dollhouse (pictured here) for the PTA at St. Margaret’s School in Riverdale, NY. She even installed electric wiring so that lighting fixtures could be switched on. 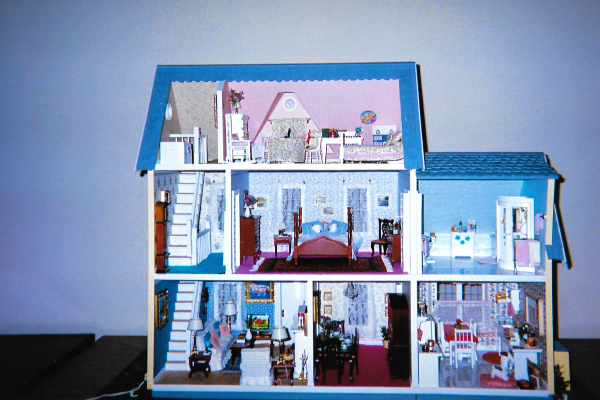 How did this unique hobby begin? When she was nine years old, Sr. Inez wanted a dollhouse for Christmas, but she knew that her widowed mother couldn’t afford one. It was 1944 and wartime, when money for staples – let alone toys – was scarce. So the little girl wrote a letter to Santa at Macy’s. Miracle of miracles, a package arrived with a fully furnished dollhouse! Sr. Inez recalls, “I have often prayed for that generous person who made that possible for me.”

Taught by her mother to sew, Sr. Inez picked up her hobby again almost forty years later, saving money to buy a ten-room dollhouse kit, working on it in precious spare moments. In 2013 she finally finished that model, complete with lamps and ceiling lights, and donated it to the PTA at St. Gabriel’s School, Riverdale.

Once, for her Italian class at St. Barnabas H.S. in the Bronx, Sr. Inez glued cardboard boxes together to make a house, painted and wallpapered it, bought furniture, and had her students label everything in Italian. Then they created dialogues, using a mini-doll family. With a creative teacher like Sr. Inez, who among us wouldn’t love to learn another language? Student teachers, take note!

An excellent seamstress, Sr. Inez learned from her mother to use a sewing machine when she was 10 years old. She made tiny curtains, bedspreads and other items for the dollhouse.

Later, those sewing talents came in handy when Sr. Inez taught after-school ballet classes at St. Athanasius, St. Joseph, and Seton Academy, all in the Bronx, and made the students’ costumes for Spring Recitals. Mr. Kastenbaum, owner of the evening and bridal gown factory where her mom worked, donated trimmings and fabric remnants. “His generosity helped me make many little girls very happy,” she recalls, “because they got to keep the costumes after the performances.”

Sr. Inez no longer makes dollhouses or sews ballet costumes, but even though retired, she is far from idle. She has made several babies’ bibs in counted cross stitch, and plans to sew doll clothes from her stock of remnants and trimmings. Lucky the children who will receive those beautifully dressed dolls! She has also translated documents from Italian for researchers collecting writings to and about Elizabeth Seton. Sr. Inez, a woman of many talents and boundless creativity, finds joy in sharing her gifts with others. Like the small frames and furnishings of her dollhouses, this diminutive Sister of Charity has room to hold – and give – boundless love.

Your ticket for the: NCSW Spotlight: Sister Inez Mela, Sisters of Charity of New York