March 8, 2017
No comments yet
Daughters of Charity of St Vincent de Paul, News 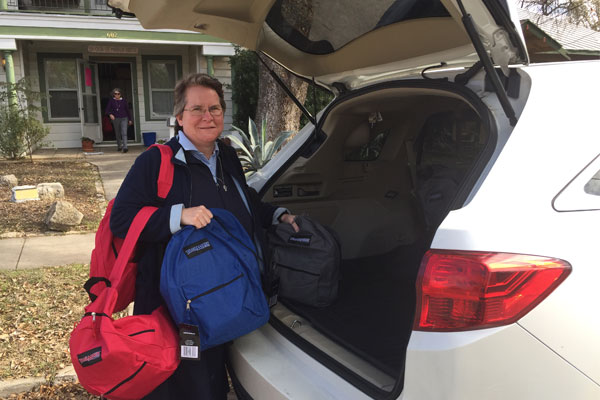 Night after night, staff and volunteers at Casa RAICES find themselves housing new individuals seeking asylum, sometimes adding up to more than 800 refugee children and mothers every month.

Why are so many people finding themselves here? Casa RAICES is the place where thousands of families stay after being released from one of two nearby immigrant detention centers before traveling elsewhere, often to meet up with other family members or friends already in America. Many women and children spend weeks, sometimes months, in these centers after fleeing their homes, enduring months of migration, and seeking asylum from gang violence, domestic violence, or abuse back in their home countries.

Casa RAICES is a part of the Interfaith Welcome Coalition (IWC), an organization designed to help immigrants seeking asylum in the United States. The IWC was started by Kelly Allen who brought together churches and other groups who were interested in making a difference for these refugees. ICE (Immigration and Customs Enforcement) take women and their children from the detention centers to the bus stop and airport. When IWC learned that some of these families were staying overnight at the bus stations, volunteers began taking immigrants into their homes.

Allen and the others quickly realized this wasn’t a temporary situation and, together with the Refugee and Immigrant Center for Education and Legal Services (RAICES), formed Casa RAICES.

Casa RAICES is run by RAICES and receives support and volunteers from the IWC. Volunteers work day and night to make the immigrants feel welcome. “We really emphasize making them feel at home. They’re coming to us after being treated with disrespect on both sides of the border,” says Daughter of Charity, Sister Denise LaRock. “We try to do the little things like give them a hot meal and a made bed…But we also do bigger things like prepare backpacks with snacks, water, toiletries, coloring cooks, crayons, etc. for these women who are getting ready to travel up to two or three days or will have to sit at the bus station for a long time.”

Sister Denise LaRock, who has been serving with the IWC and Casa RAICES for roughly a year, recently received the Kelly Allen Service Award for her “gracious and willing spirit [which blesses] the IWC and the women and children she serves.”

“I love getting to spend time with families, playing with the children and preparing the women for their trip. I try to do what I can to put them at ease about their long journey ahead, including explaining to them how to use their bus ticket,” she says.