March 9, 2017
No comments yet
News, Sisters of Charity of Saint Elizabeth 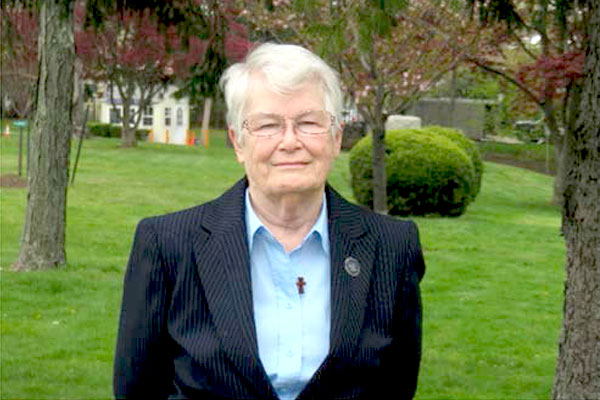 Over the course of more than 60 years as a Sister of Charity, Sister Peggy Welch has faced many challenges. When confronted with a task or a problem, her strategy is always to address it head on. Rooted in faith and trust in God’s providence, she lives out the charism of charity with doggedness and determination to make life better for those she encounters on her journey.

Peggy Welch was born in New York City and grew up in Teaneck, New Jersey. Her parents were devout Catholics who modeled the faith through worship at daily mass and devotions at home. Peggy remembers regularly attending mass as a very young child. “I used to crawl around in church and get my brother to crawl around after me. The nuns were really petrified when we were going to come to school!”

Peggy attended St. Anastasia School and, much to the relief of the nuns, did not prove to be the terror that they feared. In fact, a deep and meaningful connection developed between Peggy and the sisters. Sister Peggy remembers that at some time while still in grammar school, “I was standing on second base in the little ball games we used to play in the street and I decided that I wanted to be a nun.”

Although Peggy continued to believe that she had a religious vocation when she graduated from St. Cecelia High School in Englewood, she agreed to attend a year of college at the urging of her mother. In September following her first year at the College of Saint Elizabeth, Peggy entered the Sisters of Charity.

Because of the great demand for teachers to meet the needs of rapidly growing Catholic schools, Sister Peggy was sent out to teach only weeks after entering. She received her on-the-job training at St. Paul’s School in Ramsey, actually teaching in the basement of a nearby seminary while the construction of St. Paul’s School was being completed. She went on to teach elementary students at St. Catharine School in Glen Rock and Our Lady of Sorrows in South Orange, before moving to teach at the high school level at St. Mary of the Assumption in Elizabeth.

Wherever she ministered, she gamely took on extra duties to meet the needs presented. She recalls that at St. Mary’s, “They had me in charge of the band at one point. I had no musical ability, so that soon ended!” Her tenure as the girls’ basketball coach was a bit more successful, though the team’s victories were limited by the amount of practice time then allotted to the girls’ basketball program.

In 1960, Sister Peggy answered the call to teach at St. Joseph High School in Pensacola, FL. The school was a mission school of the Sisters of Charity. Again, Sister Peggy dove in to meet the needs presented and help her students succeed. She remembers encouraging her students to prepare science fair projects. She describes her motivational style as, “Here’s the hammer. Here’s the nail. Now do it!”

After thirteen years in Pensacola, Sister Peggy returned to New Jersey to teach math and chemistry at Saint Vincent Academy in Newark. She became aware of a program that offered aid to help religious women attend law school. She decided to pursue this new opportunity, viewing law as a means to help people struggling with so many problems in the inner city. By attending Rutgers Law School at night while continuing to teach by day, Sister Peggy earned her J.D. degree and began a new chapter in her ministry as a Sister of Charity.

As an attorney, Sister Peggy has found unique opportunities to help the poor and work for justice, often serving as the voice for those who otherwise would have no representation. She represented low income clients in a wide variety of matters and particularly became involved with advocating for decent public housing. One of her most memorable experiences was when she volunteered with the Intercommunity Legal Conference to represent people facing deportation proceedings at an immigration detention center in Oakdale, LA. She did what she could for her clients there, even if it meant simply initiating procedures that would buy them a little more time before deportation.

From 2003 to 2011, Sister Peggy served on the Leadership Council of the Sisters of Charity while continuing to take on a few legal cases pro bono. She is currently a pool attorney for the Essex County Office of Law Guardian in Newark. The stated mission of this office is “to deliver the highest quality of child-centered advocacy that best assures children’s rights to health, safety, and well-being and that promotes their best opportunity to thrive,” a mission surely aligned with the mission of the Sisters of Charity. In her role as a pool attorney, Sister Peggy represents abused and neglected children in family court matters. She protects the child’s legal interests and articulates the child’s wishes, often making recommendations to the judge as to how those wishes may be accomplished.

Sister Peggy finds that her current ministry as an advocate for children is very satisfying. She says, “I know I’m helping children and people who can’t help themselves.” Sister Peggy views her ministry as just another example of what all Sisters of Charity do to as bearers of hope to help people in need. She is proud to be part of a community committed to charity through action. “If we see a problem, we do something about it. I think all sisters do that.”

Your ticket for the: NCSW Spotlight: Sister Peggy Welch, Sisters of Charity of Saint Elizabeth