It was in 2001 that Sister Joan Dawber, a Sister of Charity of Halifax, recalls first hearing about human trafficking. Sisters from all around the globe were invited to look at the issue of human trafficking and how their congregations could respond.

“For me it was an important call. I ignored it. Because at the beginning I thought it was horrible and I didn’t want to know much about it. And at the beginning it was scary,” said Sister Joan. “But when we come to prayer, we are changed in the process of the praying. For me, I became changed in the process and thought I should do something about it. If I could start something, other people could participate in it too. So I went and started to learn about human trafficking.”

Sister Joan and other sisters began forming a coalition of religious congregations who were also interested in combatting human trafficking. The initial goals were to prioritize educational opportunities, safe housing and legislative advocacy. She became the chair of the safe housing committee and began asking congregations to offer spare rooms in their houses to take a woman in for a short time.

But quickly she learned that a 1-2 night stay in these emergency safe places was not enough time – there needed to be a more long-term solution for the women. New York City social service providers were absolutely dire for safe housing. So Sister Joan and Lifeway Network Board came back to the coalition and asked each congregation to provide seed money to purchase and run a house. Out of that collaboration, Lifeway House 1 was born.

Sister Joan, now Executive Director of Lifeway Network, remembers the first woman who came to stay at Lifeway House 1, a student who was foreign-born and labor trafficked.

“Our first person who came to us had come to the U.S. to go to school and then go back to her country and work for her family,” Sister Joan said. “Her passport was taken away and she was put in domestic labor – domestic servitude – a servant in their house. She wasn’t allowed to eat at the table, only on the floor in the corner, and not allowed to eat unless given permission. She stayed for over 6 years, not allowed out of that home. [Her duties were] cleaning the house, laundry, and children. If they felt that the neighbors were starting to know, they would move her to another house. That’s what trafficking does – they treat you as a commodity.”

Unique to Lifeway Network is the community living model, in which three Catholic sisters intentionally come together to live in the house with the women survivors of human trafficking. During a woman’s year-long stay, these sisters provide safety and a community experience while she works with a case manager on a wide range of services which can include ESL classes, health care, dental needs, psychological care, school or certificate training, interview skills, immigration papers, and more.

“Trafficking itself is a very isolating experience, partly at the design of the traffickers, and partly because you’re removed from family and friends,” Sister Melissa said. “Life in the house is sharing meals, cooking and downtime together, listening to stories from the day, and supporting each of our guests in their efforts to move forward from traumatic experiences of being trafficked. It’s a place where we can grow and truly become our best selves.”

Sister Melissa says the house is rich in cultural diversity, religious diversity, life experience, and age. No trafficking story is the same.

“I think sometimes people hear about trafficking and think that it’s scary or really sad. It’s true that the women we live with sometimes struggle emotionally, psychologically, physically. But it’s not sad, it’s just real life and what it means to be on the healing journey. We have lots of moments of joy and laughter and love,” Sister Melissa said.

Women graduate the Lifeway program when they are ready for independent living. Those indicators include stable employment and income, improvement in well-being, ability to access community resources, community beyond the safe house, ability to recognize potential new exploitation, and confidence in taking the next step.

Lifeway’s community living model recently attracted the attention of Maria Grazia Giammarinaro, the United Nations Special Rapporteur for Human Trafficking, during her visit to the United States this past January. Sister Joan, Sister Melissa and the residents of Lifeway House 1 were able to host her and her UN staff for a brief visit. Learn more here.

“She was very interested in how our model works and what the benefits were for our guests,” Sister Melissa said. “She was also interested in how the guests integrate back into society. The offer of suggestions for systemic change, coming from our guests, was really wonderful. The rapporteur’s role is international – she can make recommendations to countries on ways to improve in anti-human trafficking efforts.”

An integral component to Lifeway Network is its important work in educating the community about human trafficking. In 2016 alone, 941 calls and 327 human trafficking cases were reported within the state of New York to the National Human Trafficking Hotline (888-373-7888).

It began with an educational piece developed by the Sisters of Charity of Halifax called ‘The Root Causes of Poverty and the Issues of Human Trafficking.’ This day-long workshop, aimed at educating the congregation, grew into a much larger educational program that now informs local schools, universities, civil society groups, women’s groups, law enforcement and health care providers. Sister Joan says that Lifeway Network has been able to speak to 10,400 people since its inception.

“We educate anybody and everybody who would like to be educated,” Sister Joan said. LifeWay helps to raise public awareness of potential exploitation situations. Signs could include “someone that doesn’t speak the language and someone else is interpreting, and there’s no eye contact, or they could have moved from job to job, maybe they have no papers, they sometimes don’t know where they are.” She says if a young person is trafficked in the U.S. they are taught to lie, so their stories never pan out.

Lifeway Network will celebrate its 10th anniversary year on March 14, 2017, marking the time when Sister Joan and the coalition began the initial stages of establishing a safe home and educating the general public. They will celebrate this year with an education day April 1, the Event Towards New Life fundraiser May 25, and 5K Race for Freedom June 18. Learn more here.

Sister Joan is proud to say that Lifeway continues today to be “the only organization in New York City that offers beds to survivors of human trafficking who are sex trafficked, labor trafficked, domestically trafficked and foreign-born trafficked.”

And That is something to celebrate. 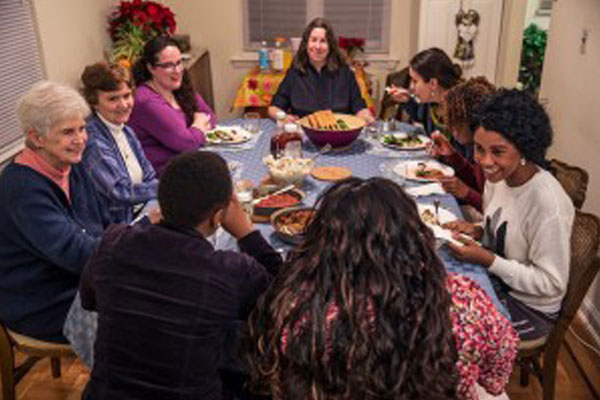 Your ticket for the: Sisters offer hope to survivors of human trafficking in New York City