March 12, 2017
No comments yet
News, Sisters of Charity of New York 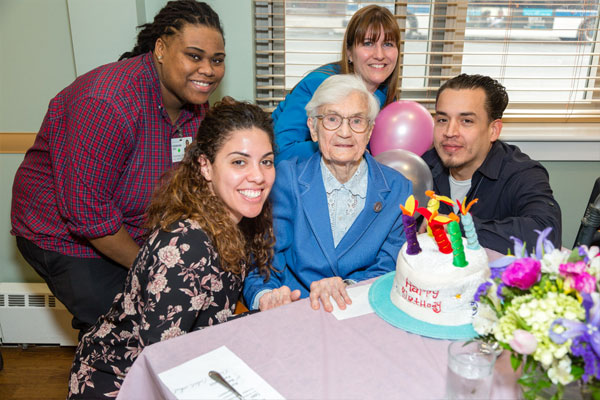 Sister Angela Marie, now in her seventy-ninth year as a Sister of Charity, served in education for forty years where she taught grades one through eight. In 1979 she joined the staff at Sisters of Charity Center and served in several capacities until 2010 with a level of skill and precision that is unequaled to this day.

Two years after her retirement, Sister Angela moved to the Convent of Mary the Queen. In 2014, she was one of twenty-three Sisters that moved to the Jewish Home LifeCare assisted living facility on University Avenue in the Bronx (now The New Jewish Home). In an interview with the Associated Press, Sister Angela was quoted as saying, “I don’t think anyone came here with a heavier heart than me.”

But in a short time Sister Angela Marie came to love her new home and welcomed the opportunity to continue the mission of charity in a community that includes not only lay people, but also those of different faiths.

As part of her regular routine, Sister Angela stops by every table at breakfast to great her fellow residents with a warm smile. During her daily one-mile walk, she often picks up groceries for those in need. When a new resident moves in, she is among the first to greet them and help them feel at home in their new environment. Still quite adept with the computer, Sister Angela never misses an opportunity to make others feel special with one of her homemade cards. For these reasons the staff at the New Jewish Home loves Sister Angela as much as her fellow residents love her.

At her recent birthday celebration, Sister Angela thanked all for making her 100th birthday so special. She was particularly grateful to her fellow Sisters saying, “All hail and praise to you, my congregation, whom I love, for all you have done for me.” Sister Jane Iannucelli, SC, President of the Sisters of Charity, responded for the Congregation proclaiming, “Angela, all praise and hail to you from your Congregation, who loves you so much and is grateful for all you have been and done.” God bless Sister Angela Marie Rooney, SC, now in her second century of a life lived in love.

Your ticket for the: NCSW Spotlight: Sister Angela Marie, Sisters of Charity of New York