March 13, 2017
No comments yet
News, Sisters of Charity of Cincinnati 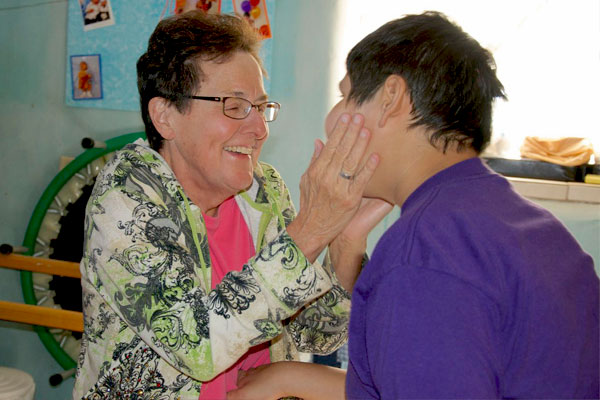 Following in Elizabeth Seton’s footsteps, S. Peggy Deneweth says Elizabeth’s belief in empowering through education motivates and encourages her to carry out her ministry daily. Sister ministers at the Santo Niño Project in Anapra, Mexico, a ministry she and three other Sisters of Charity began in 2002 for poor children with special needs and their families. S. Peggy explains it all started after the women were asked by Columban Missionary Fr. Bill Morton to provide medical care to a neighbor of his. “One thing led to another and before we knew it S. Janet Gildea, a physician, was seeing patients in the kitchen of his house, and Sisters Carol Wirtz, Ann Dorenbusch and I were using his bedroom for massage therapy. Sometimes I think that is the way God works. God knows that if we just dip our ‘toes’ in the water we’ll get hooked.”

At the Santo Niño Project, S. Peggy helps the children with exercises and therapy while teaching their parents how to do the treatments at home. What she names as her most important role, however, is “being present, accompanying the women.” She calls it “a community where women can share their lives with each other in a safe and peaceful environment.”

“The women look forward to these days most especially now with the violence and death that surround them on a daily basis,” Sister said. “They have taught me so much about living in the moment and being grateful for each moment no matter what it holds.”

Serving on the U.S.-Mexico border is challenging. Although she is not afraid for herself, S. Peggy says she fears for those she has come to know and love.

The families’ strength inspires and compels her daily. Sister said she loves to see the spark in their eyes when they discover that they have the power within themselves to overcome adversity.

“Jacqueline, one of our Santo Niño children, came to us as a baby with cerebral palsy,” S. Peggy said. “Her development was slow and she could hardly hold her head up. I taught her mother and father some simple exercises to strengthen her neck muscles, arms and legs. I just said work with her here and in your home and she will progress.

Jackie is almost 3 years old now and she runs all over the place. One day I saw her mom in the clinic and I said to her as her daughter ran by me, ‘She is a miracle and it’s because of you and your husband’s work with her!’ She smiled and her eyes sparkled. Her eyes said it all.”

See the feature video on the Santo Niño Project.

Your ticket for the: NCSW Spotlight: Sister Peggy Deneweth, Sisters of Charity of Cincinnati