Two SCLs learn about the influence and relevance of St. Vincent de Paul

June 20, 2017
No comments yet
News, Sisters of Charity of Leavenworth 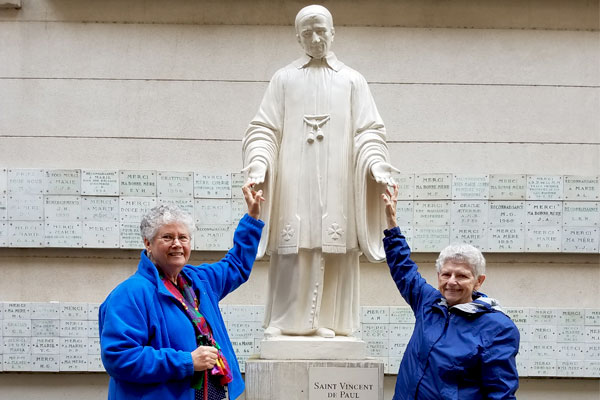 In 1617, Vincent de Paul, a Catholic priest in France, had two conversion experiences that dramatically shaped his life and spirituality, and subsequently influenced many religious congregations and organizations that trace their roots to him, including the Sisters of Charity of Leavenworth (SCLs).

In this 400th anniversary year of the Vincentian charism or spirit, two SCLs spent an enriching month in France walking the path of St. Vincent de Paul and absorbing his spirituality. Sisters Margaret Finch and Peg Johnson participated in the program hosted by the International Formation Center for St. Vincent de Paul based in Paris. From April 25 through May 24, they joined 22 other persons from around the world in prayer, conferences, pilgrimages, song and laughter. Participants, directors and presenters included other women religious, priests, brothers and laypersons.

Sister Peg was impressed by one of the speakers who stressed that living the virtues espoused by Vincent has the potential to transform the world. These virtues include humility, simplicity, charity, zeal, joy, gentleness, justice and others.

“Vincent preached and lived being on fire with love of God and service to the poor,” Sister Peg says. “This is at the heart of the Vincentian charism.”

Sister Margaret sees parallels in the work that Vincent did in the 17th century and the services provided by his followers today. He collaborated with others to provide shelter for the homeless, youth in need and displaced persons. Sister Margaret plans to return to all the information she received during the spirituality program and pray with it to learn more about St. Vincent and the charism.

She found the pilgrimages to so many holy places fascinating. In the church where Vincent was ordained, the priest celebrating Mass with the group used Vincent’s own chalice. The pilgrims saw original papers documenting the 17th century founding of the congregations of priests and sisters who ministered outside monasteries to serve both spiritual and physical needs of people. St. Vincent established the Congregation of the Mission (Vincentian priests) and worked with St. Louise de Marillac to found the Daughters of Charity.

Sister Peg came away from the entire experience appreciative of the fact that she and the SCLs are part of the larger worldwide Vincentian family that includes lay and religious men and women who share a common spirit. Sister Margaret agrees adding that she is grateful for all that she was able to see, hear and do. “This opportunity enriched my prayer life and will continue to do so as I revisit the memories and review my notes,” she says.

In addition to Vincentian sites, the program included trips to the Taizé prayer community and to Lourdes. On their own, the two SCLs traveled to Switzerland and to Italy where they met Sister Janet Cashman, an SCL who is engaged in migrant ministry is Sicily.

“My eyes have been opened to the wonders of Paris and Rome; my heart, to the depth of what we saw and learned; and my soul, to the desire to be fire and grace to people I encounter,” Sister Peg sums up.

“Through the program, we witnessed firsthand the connectedness among members of different parts of the Vincentian family and the similarities we share,” Sister Margaret concludes. “This gave me great hope that the Church is alive, our faith is alive, and that together, we can help transform society and the world as Vincent did in his time.” 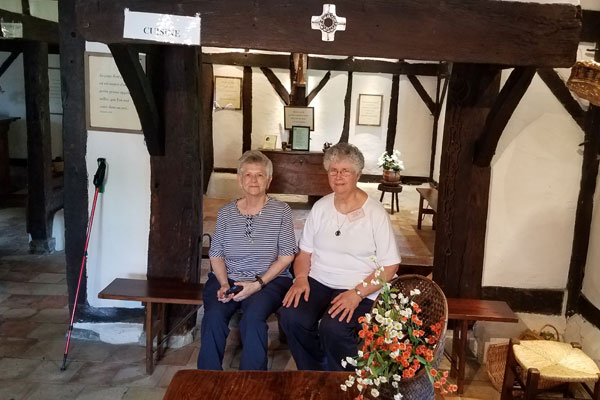 Your ticket for the: Two SCLs learn about the influence and relevance of St. Vincent de Paul

Two SCLs learn about the influence and relevance of St. Vincent de Paul