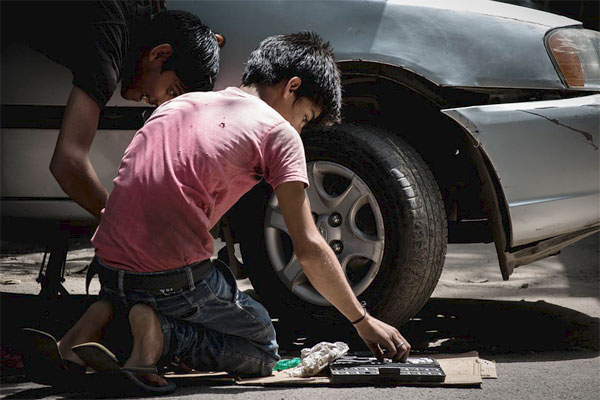 Imagine a world free of child labor! The number of children worldwide caught up in child labor is astounding – 168 million. These numbers are not a reflection of the reality; those who work in the informal sectors like domestic work, agriculture or illegal mining are not counted. They live in the shadows. If there is no reliable data on child labor in a country, there will be no allocation of resources to free them from this bondage, provide education and a life of dignity. Their childhoods have been stolen from them. Child labor violates human rights.

Not all work done by children can be categorized as child labor. According to the International Labor Organization, the term “child labor” is often defined as ‘work that deprives children of their childhood, their potential and their dignity, and that is harmful to physical and mental development.’ Often child labor involves children being enslaved, separated from their families, exposed to serious hazards and illnesses and/or left to fend for themselves on the streets of large cities, at a very early age.

Most countries around the world have child labor laws that set 14 or 15 as the minimum age for work and prohibit children under 18 working in hazardous conditions. Extreme forms of child labor can include children being enslaved, the sale and trafficking of children and debt bondage and compulsory labor, which can lead to the children being separated from their families and/or left to fend for themselves on the streets.

As defined by Article 3 of ILO Convention No.182, the worst forms of child labor are:
–  All forms of slavery or practices similar to slavery, such as the sale and trafficking of children, debt bondage and serfdom and forced or compulsory labor, including forced or compulsory recruitment of children for use in armed conflict;
–  The use, procuring or offering of a child for prostitution, for the production of pornography or pornographic performances;
–  The use, procuring or offering of a child for illicit activities in particular for the production and trafficking of drugs…;
– Work which, by its nature or the circumstances in which it is carried out, is likely to harm the health, safety or morals of children.

Many factors contribute to child labor including poverty, lack of access to education and skills training, illiteracy of parents, lack of awareness of the negative effects of child labor, the family’s social and economic circumstances, family indebtedness, high levels of adult unemployment and the cultural values of the family and community. The ongoing conflicts, war and disasters are driving more children into vulnerabilities, easy targets for exploitation. Children are valuable employees as they are cheap, unaware of their rights and unlikely to refuse their employer’s demands.

What can we do to address child labor?

There is no single strategy that will eliminate child labor; the most important being the enforcement of anti-child labor laws, reducing poverty and inequality, providing accessible and affordable education, skills training and decent jobs. These will shield them from exploitation.

Join the Alliance 8.7 initiative of the International Labor Organization to implement Sustainable Development Goal 8.7 for a world free from forced labor, modern day slavery, human trafficking and child labor in all forms, with particular attention to its worst forms.

Written by Sister Teresa Kotturan, NGO representative for the Sisters of Charity Federation at the United Nations

Learn more: Watch this video – ABCs of Child Labor….15 products touched by child labor and child slavery. How many do you use?

Your ticket for the: Imagine a World Free of Child Labor