May 18, 2017
No comments yet
News, Sisters of Charity of Cincinnati 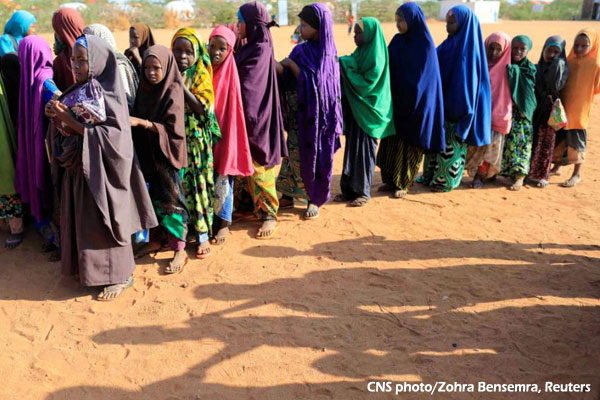 The Somali family of 11 arrived to us on a Friday afternoon in early April. We watched in wonder as person after person climbed out of the hefty Catholic Charities van amid grocery bags and beat-up suitcases. Peering into their bright eyes as we welcomed them, I knew that something beautiful and unforgettable was happening.

Earlier in the week, a friend from Catholic Charities Refugee Resettlement called to see if I had any ideas about temporary housing for a large group of refugees. The goal always is to find a sustainable, autonomous living situation, but that was unlikely to happen before the family landed Thursday night. I approached our Sisters of Charity leadership team, and they enthusiastically offered a house on our property to welcome the new Cincinnatians. What joy I felt in that moment to be called to this vocation!

On Sunday, I went to check how our guests were settling in. I soon ended up at the kitchen table sipping cardamom tea with Mahdi, the mother of the family, and several of her daughters who speak excellent English. We shared stories. I tried to explain what a Catholic sister is, eventually having to run a Google image search for “The Sound of Music” to help make the point. They recounted the long journey that brought them here, a journey that began with a horrific civil war in their home country.

Mahdi’s father was killed during the violence, and one of her babies died of malnutrition. The girls recalled hearing frequent explosions and gunshots as they grew up. Eventually, they fled to neighboring Ethiopia, where they would spend a combined 10 years in two different refugee camps. The youngest child, Jamaal, was born there; the only existence he knew before coming to the United States was that of living in a tent on a compound with thousands of other displaced people.

Working with immigration over the last decade, I had heard the statistics on refugees. I knew that, according to the UNHCR, less than 1 percent of refugees worldwide are resettled to a third country. I learned that families resettled in Cincinnati have spent anywhere from seven to 20-something years in camps before resettlement. Those numbers had broken my heart. And now, here I was, looking upon the faces of people who lived this reality. I took a deep breath filled with sadness and reverence. I tried to imagine what it must be like to walk life in their shoes, but of course, I can’t come close to grasping it. All I could do is marvel at their sheer human spirit as they shared, a spirit that somehow had not been extinguished by years of suffering.

“We are so happy to be here,” said Nafisa, one of the daughters, her smile radiant and sincere. Mahdi nodded in fervent agreement.

A neighbor in need

Just then, in the midst of such poignant conversation, we heard a commotion outside, where some of Mahdi’s sons had been playing soccer in the driveway.

Three sweaty boys, all different heights, came dashing inside to find me. Practically tripping over each other, they urged, “Come! Come now, Sees-tah!”

I set down the mug I’d been cupping and began to rise from the table, brow furrowed in curiosity. “What is it?” I couldn’t yet detect the emotion behind their urgency. Was their soccer ball stuck in the tree? Did they see a rainbow overhead?

Then, I noticed exasperation in the oldest boy’s face. Lanky and tall, his usual goofy smile was gone. He struggled just for a moment to recall the correct English words and then pronounced, “The man! He fell!”

Curiosity escalated into alarm. I bounded out the kitchen door, scanning for a man on the ground somewhere. Amiin, the father of the family, grabbed my hand and pointed toward a parking lot a few hundred feet away.

I gasped when I saw him: an elderly gentleman sprawled on the blacktop, his electronic mobility scooter on its side next to him. There is a nursing home next to our motherhouse, and we often see elderly neighbors out for strolls or rides. It seemed this man accidentally drove off of the curb and was thrown from the chair. As I ran closer, I saw blood streaming down the left side of his face, possibly coming from his ear. Adrenaline rushed. I called out to him, and when he responded, albeit weakly, I said, “I’ll be right back, sir! I’m going to call 911!”

Inside the house again, I shouted, “My phone!” The girls and I tore through the first floor, looking for it, until one of them placed the well-known rectangle in my hand. We all hurried back outside as I dialed.

Once I got off the phone with the dispatcher, I knelt down next to the injured man, who told me his name is John. A few feet off stood Amiin and Nafisa, arms linked and eyes intently compassionate. I motioned for them to come closer if they wanted to. They did. I could tell Amiin wanted to say something, but he couldn’t find the English words. He simply put his hands over his heart and shook his head with worry as he repeated, “Soh-rry. Soh-rry. So soh-rry.”

Spread out on the hill next to the house, the other nine family members also stood like a painting, barely moving, simply watching and praying. Even little Jamaal seemed concerned, holding Mahdi’s hand and occasionally looking up at her for a mother’s assurance that it would be OK. It was a striking and lovely vision, the women’s bright hijabs bursting with an array of color against the backdrop of green spring grass.

All the while, John lay in the parking lot, thankfully conscious and not in too much pain. I talked to him gently while we waited for the ambulance. I told him, “I don’t want you to move your head, but do you see those people out of the corner of your eye? They are the ones who saw you here and ran to get me! If it weren’t for them, who knows how long you would be lying here!”

John said affectionately, “They are angels! Please, tell them all that they are angels!” My eyes met Nafisa’s, and we both smiled. John seemed calmer and calmer, and he even began to make jokes.

“Oh, dear! My daughters are going to give me a spanking when they find out about this adventure!” He laughed good-naturedly, and the three of us did, too.

Soon, sirens filled the air. The emergency squad arrived on the scene and began to care for John. I noticed a few eyebrows rise as the men observed our Muslim refugee friends keeping vigil. I’m sure it was an unexpected sight on the grounds of a motherhouse, surrounded by a traditionally white, Catholic, blue-collar neighborhood. I smiled. Then, I stepped back, next to Nafisa and Amiin. By this time, a few other sisters had come out of their house and stood on the hill with the rest of the family.

As the EMTs lifted John onto the stretcher, Nafisa tilted her head and said quietly, “What a beautiful man. He was so kind, and patient, and peaceful … wow. The way he laughed … wow. Just beautiful. I will continue to pray for him.” Her eyes were filled with a pure tenderness that I’ve rarely seen in another human being.

Several minutes later, the ambulance drove away, and Amiin, Nafisa and I ambled together back toward their house. The whole group came inside and gathered in the dining room, some of the kids on the couch against the wall, some in random chairs, and some of us at the table. Jamaal colored next to me, and the oldest girls began cooking something in the adjacent kitchen. Soon, stacks of Somali pancakes emerged for all to share. We talked and laughed until after the sun was down.

We are all neighbors

On the way home that night, I pondered the sacred encounter, turning it over and over again in my heart, not wanting to miss any of its profundity. I realized I had witnessed a modern-day Good Samaritan moment. Those our society would exclude become the unexpected heroes. In this case, our dear Muslim refugee friends illuminated the Christian Scriptures.

As anti-Muslim sentiment rises and politicians attempt to close the door on refugees, many in our country would look down upon our Somali friends. It’s likely that people would judge or condemn them based only on their outward appearance. And yet, it is their inherent nature to be beacons of goodness and love.

Our Muslim refugee friends have been “neighbors” in every sense of the word. Their kind living is rooted in their faith that, while gravely misunderstood, is named by a word that means peace. They love fully, and they have an uninhibited instinct for mercy, even when life has been unmerciful to them. They have much to teach us. Just as Jesus urged at the end of the Good Samaritan story (Luke 10:25-37), may we “go, and do likewise.”

Editor’s note: Names of the refugees have been changed for their privacy. This article was originally published on 5/12/2017 on Global Sisters Report.

Your ticket for the: The Good (Samaritan) Muslim refugees