November 12, 2016
No comments yet
News, Sisters of Charity of Leavenworth 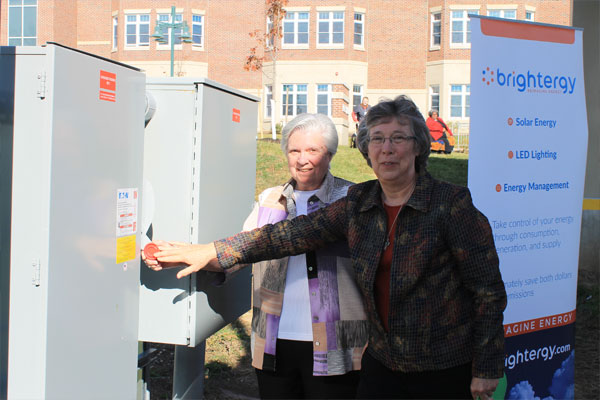 As part of the transfer of energy ceremony on Nov. 11, Sisters Nancy Bauman (left) and Eileen Haynes flipped the switch to activate the solar panels over the south parking lot on the campus of the Mother House of the Sisters of Charity of Leavenworth.

The new solar-paneled, 50-space parking lot on the Sisters of Charity of Leavenworth (SCLs) Mother House campus – a first in Leavenworth – officially went “live” on Friday, Nov. 11. The SCLs hosted a transfer of energy ceremony that day to flip the switch to activate the new solar power generating system.

In line with their deep respect for creation and with Pope Francis’ call to preserve the earth and its natural resources, the SCLs committed to this installation. They enlisted Kansas City-headquartered Brightergy, a national leader in commercial solar energy projects, for the job. W.L. Cassell & Associates, also of Kansas City, assisted with the RFP phase and supervision of the project, and Capital Electric with installation of electrical lines.

The solar panels are now generating power for heating and cooling the new Ross Hall skilled nursing center with Westar utility company providing back-up. Exploration of solar energy was a consideration throughout the planning and construction of the new SCL nursing facility that opened on Sept. 30, 2015. The SCLs delayed the solar panel installation project until completion of the new Ross Hall to preserve needed parking space. However, conduit connections were installed during construction to link the solar power generating system to the Ross Hall electrical system.

Sister Jean Anne Panisko, SCL treasurer, who coordinated both the Ross Hall and the solar panel initiatives, explains that during their past large Community meetings, Sisters expressed interest in exploring alternative energy sources. She sees witness value in the solar-paneled parking lot – a visible sign to Leavenworth, the surrounding area and visitors to the campus. Sister Jean Anne credits the 2010-2016 SCL Community Council who approved the project with strong encouragement by Sisters Nancy Bauman and Eileen Haynes, members who advocated for being mindful of the earth in decisions related to both Ross Hall construction and new energy sources.

Construction for the solar-panel initiative began in mid-June 2016. The project included installation of the steel roof with solar panels over the large existing parking lot and the system connection to electrical switch gear inside the building. Monitors located in Ross Hall will allow the Sisters to track how much energy has been generated and used. Water collected from gutters of the parking lot roof will be routed to a nearby SCL garden.

An added feature of the new covered parking lot is that it will protect cars from inclement weather. This parking lot is available to employees, Sisters and persons using Marillac Center at the Mother House. 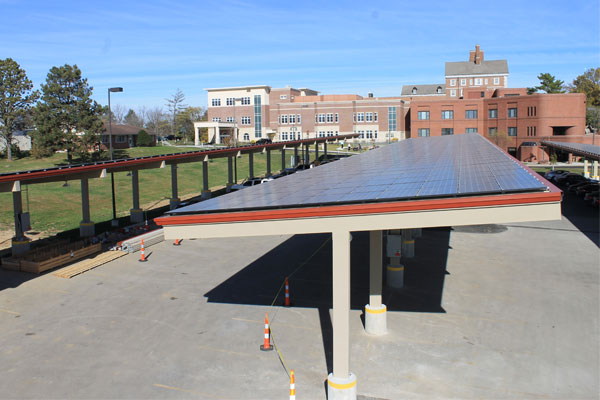 This view from the south shows the solar panels over the 50-space parking lot with Ross Hall, Marillac Center and the Mother House in the background.

Story written and shared by Therese Horvat, Director of Communications for the Sisters of Charity of Leavenworth.

Your ticket for the: Solar-paneled parking lot goes ‘live’ on SCL campus