May 31, 2016
No comments yet
News, Sisters of Charity of Seton Hill 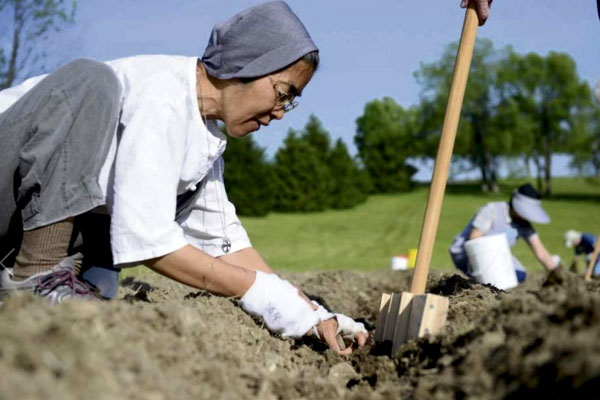 A handful of nuns raced against an approaching rainstorm Monday as they tucked pieces of potato into freshly tilled earth near Greensburg’s Seton Hill University campus.

The women, who are members of the Sisters of Charity of Seton Hill, and volunteers from the university planned this week to finish planting 600 pounds of the seed potatoes in a nearly half-acre garden developed jointly by the sisters and the campus community.

Darren Achtzehn, food service director at the university, said the plants should provide more than 22,000 generous servings of potatoes next fall when the crop is harvested.

“It should yield 2.8 tons out of the ground,” he said, with each pound feeding four people.

The garden partnership came about when separate plans germinating at the university and among the Sisters of Charity dovetailed. Sister Barbara Ann Smelko, coordinator of vocation ministries, said members of her community were inspired to grow their own produce after attending a prayer retreat in July where topics included stewardship of the environment.

“We decided we needed to do something,” she said, and the sisters began to brainstorm productive ways to use undeveloped areas of their property bordering the campus.

At the same time, she said, Achtzehn was looking for more space to expand the nearby 20,400-square-foot, volunteer-maintained garden at the university. Since 2009, the garden has supplied the university dining hall with a bounty of fresh food, including tomatoes, squash, cucumbers and turnips.

Joining forces to create the potato patch, Achtzehn and the sisters plan to share the resulting harvest with the university’s food service and the kitchen at the motherhouse for retired sisters each receiving a third and the remainder being donated to the Westmoreland County Food Bank.

“It’s a way of giving back to our communities,” Smelko said.

“On average, we use about 800 to 900 pounds of potatoes every two weeks, so this will get us through a couple months in our fall semester,” he said.

The property was known as the Jennings Farm when it was purchased in 1882 as a site for the Sisters of Charity motherhouse.

“It started out as an actual working farm, so we’re going back to our roots,” Smelko said.

While founders of the congregation carried on the farming tradition, there had been no crops grown at the property in recent years, she said.

Soliciting input from a farming friend, Achtzehn advised planting the new garden with two types of potatoes that are disease-resistant — Kennebec, “an awesome white potato that’s good for baking and scalloped potatoes,” and Potomac Reds, “nice as a breakfast potato or to fry.”

LaMantia Produce of Blairsville supplied the seed potatoes and waived the charge.

“So we have zero cost to this garden so far,” Achtzehn said.

The sisters and Achtzehn plan to quadruple the size of the garden, gradually extending the tilled area over the next three years and introducing additional types of plants — onions, wildflowers and a vegetable to be chosen — that will be incorporated into a long-term plan for crop rotation and land management, Smelko said.

Achtzehn intends to use organic methods for adding nutrition to the soil and deterring wildlife and insects from feasting on the crops.

“We share the earth with other creatures,” he said. “We can enjoy it together.”

As a first step, Smelko said, her brother, George, of McDonald, has constructed a bat box that will be placed near the garden as a home for the insect-eating mammals.

“Bats consume about three times their weight in mosquitoes,” she said.

She said additional plans for the garden in seasons to come include creating habitats for butterflies and bees.

Your ticket for the: Sisters, Spuds & Sustainability: A New Partnership at Seton Hill