March 10, 2016
No comments yet
News, Sisters of Charity of Leavenworth 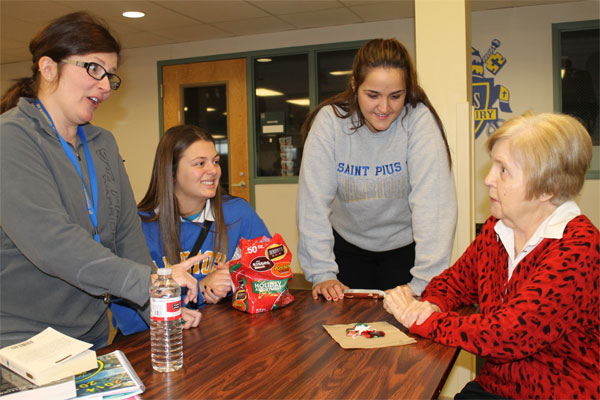 When Sister Mary Sharon Verbeck tells Joe Monachino Jr., principal, that she wants to die with her boots on at St. Pius X High School where she’s worked and volunteered for 41 years, he is comfortable enough to quip back, “I hope that it’s not in front of all these kids unless it’s after school. I want the last voice you hear to be mine!”

That kind of banter is typical between the petite Sister of Charity of Leavenworth and the towering former basketball player, who has known Sister Mary Sharon since he was 9 years old. Joe grew up at the school, worked there summers as a high school student, and came to know and deeply respect Sister Mary Sharon. Like generations of people associated with St. Pius X High School, Joe continues to hold Sister in high regard.

During a walk through the halls of the Kansas City, Mo., high school, students greet Sister Mary Sharon like a good friend and part of the family. Faculty and staff stop to visit and catch up. They tell her they’ve missed seeing her. Sister’s schedule has been disrupted by health concerns that have kept her from driving and returning regularly to her office at St. Pius.

She first served there as secretary to the principal in 1972. This included multiple responsibilities that Sister juggled with ease: managing the office and bookstore, supervising study hall and the cafeteria, and completing a detailed state report.

Sister Mary Sharon loved every minute of this mission assignment. She was at Pius from 1972 to 1981, and returned from 1984 through 2007 when a seizure (thought to be a stroke) interrupted her routine.

A benign brain tumor was the culprit that led Sister Mary Sharon to relocate to the Mother House. Following that experience, she began commuting to a volunteer post at the high school – still performing some of her familiar duties. Recovery from a back fracture in 2014 has kept Sister Mary Sharon from her regular routine. She’s eager to get back on schedule to tend to plans for graduation and to tally statistics for reports.

Through the years, Sister Mary Sharon has loved meeting new young people, watching them mature and celebrating successes with them. At age 86, she doesn’t want to slow down. Sister Mary Sharon entered the SCL Community in 1946 following graduation from Bishop Ward High School, Kansas City, Kan. She’d met the Sisters earlier as a student at the nearby former St. Mary School. Sister Mary Sharon’s Mother complained that her daughter was never home helping her; instead, she was either at the convent or on the ball diamond. Sister was on champion sports teams throughout her grade and high school years.

She held clerical jobs before she entered the convent. Because she wanted to be a teacher, she tried to keep her office work a secret from the Sisters. “They found out,” Sister Mary Sharon confesses, noting that while she did get to teach, she spent summers as a young Sister assigned to clerical positions.

Sister Mary Sharon taught every grade, one through eight, and every subject in schools in Colorado, Kansas, Missouri, Montana, Oklahoma and Wyoming. “I loved teaching. I loved the children. I love people,” she says.
“I’ve loved everything I’ve done and all that I’ve been asked to do,” she says. “Everything about being a Sister makes me happy. In the gospel, Jesus says that he came so that we can have life to its fullest. I am blessed to be able to enjoy life to its fullest!”

Your ticket for the: NCSW Spotlight: Mary Sharon Verbeck, Sisters of Charity of Leavenworth