Living life as a nun in the new millennium 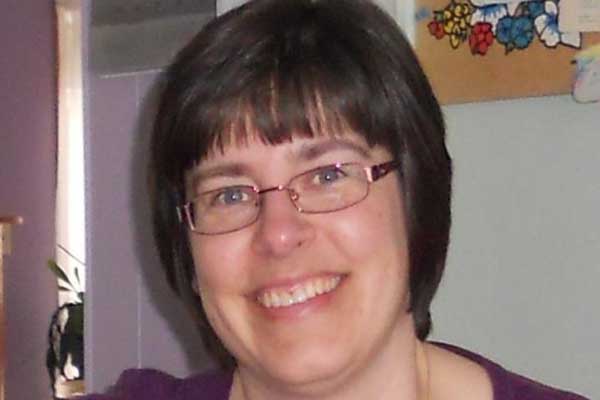 At 44 years old, Céline Belliveau is the youngest nun in the Moncton sisterhood of Notre-Dame-du-Sacré-Coeur.

She has a masters degree in social work, likes to swim and play volleyball and sings with a choir, but no, she doesn’t own a habit.

In fact, only two of the 132 sisters in the Moncton congregation still wear and own the traditional garb. “Sometimes people ask me, ‘is your habit in your closet?’ It’s like no, I don’t have one,” said Belliveau with a laugh.

What she does have is a ring engraved with the initials of the sisterhood, which she wears on her wedding finger. She received the ring at the age of 29, when she returned home to Memramcook and took her perpetual vows to the sisterhood in front of family, friends, sisters and parishioners at the Catholic church where she was baptized as a child.

“Perpetual is kind of just like getting married – you say yes for your whole life,” she said.

But it took her eight years of consideration before she committed.

Growing up in a big, religious family – she has six siblings – it was not completely foreign to be in regular contact with nuns. She was taught by a nun in Grade six and belonged to a religious youth group run by nuns.

“When I was younger, I didn’t want to be a sister – I wanted to get married and have kids,” she said.
But when she began studying pre-med at l’Université de Moncton in her early twenties and when her brother, Moncton’s Father Denis Belliveau, decided to study to be a priest, she started to have second thoughts.

“It was like a calling,” she said. “I thought, if I don’t go see and I get married and have kids, maybe I’ll always wonder, should I have done that? So I thought, I might as well go now and get that over with.”

Belliveau is definitely in the minority of those seeking to be a nun and admits the congregation she belongs to, as well as others, is faced with a membership that has been dwindling since the 1970s. She said many nuns left in the late 1960s following the Vatican II decision to make major changes in the church including abolishing the requirement that nuns wear the habit and permitting mass be performed in languages other than Latin.

The median age of the sisters in Belliveau’s congregation is 82.

“Because it’s a calling, we can’t really recruit,” Belliveau said. “Some congregations will go out there and kind of advertise and put things on the Internet or whatever. We’ve never really done that.”

The congregation was founded in the 1920s by 53 Acadian sisters who specialized in teaching and had a mission to preserve Acadian culture. At its peak, the sisterhood had between 350 and 400 nuns. While it now has 132 sisters, it still remains the largest in the Maritimes, said Belliveau.

The last person to join did so in 2007 and prior to that, Belliveau was one of two who committed to the sisterhood in the 1990s.

A large number of the older nuns live in a building on King Street at St. George Street. Parts of the building operate as a nursing home for the sisters who need extra care.

Becoming a nun and agreeing to take vows of celibacy, obedience and poverty for the rest of her life, wasn’t something Belliveau took lightly. It took her eight years to decide. While attending university she started meeting with a sister about once a month, who helped her learn about the congregation and what the vocation is all about.

“It’s kind of like having a counsellor. They are there to help us out,” she said.

After a while Belliveau decided to take her growing interest in the sisterhood to the next level and asked to be a postulant, which gave her the opportunity to live with the congregation without taking any vows. It’s an opportunity to understand more intimately, how the sisters live.

“A postulancy is usually between six months to a year,” she said. “If you have a job, you go to work, you come back home and you’re with the sisters so you pray with them.”

At the time Belliveau completed her pre-med diploma and worked part-time as a receptionist at the Dr. Georges-L.-Dumont Hospital.

Still interested in the sisterhood, she then decided to enter into a two-year novice program with the congregation. During that time she lived in one of about 10 convents in the Moncton area – houses where some of the sisters of the Notre-Dame-du-Sacré-Coeur live together.

In her second year, she visited a separate sisterhood in Nova Scotia and another in Haiti to learn about the work they do.

All congregations have a different specialty. For example, the Trappistine Sisters in Rogersville live a very secluded monastic life of meditation. In existence since 1904, they also make communion wafers.

Eventually, Belliveau started taking annual, temporary vows, committing herself one year at a time to the Moncton sisterhood. She did this for five years, and then decided to become a nun permanently.

During her early years as a nun, she was encouraged to get her degree in social work and then her masters from the Université Laval in Quebec. She then got a permanent job in psychiatry at the hospital in Bathurst.

For the last 11 years, she has lived with sisters in Bathurst while working at the hospital. This September, she took a leave from work and moved back to Moncton, as she was elected secretary general for the Notre-Dame-du-Sacré-Coeur.

She lives in a house in Dieppe with the other council members. They are responsible for managing financial budgets and for deciding the priorities of the sisterhood. For example, the sisterhood is very active in volunteering in the community and in the local hospital.

The long thoughtful process of becoming a nun has left Belliveau without regrets. “It’s like any life,” she said. “There’s always some things that are harder but I mean, when I look at the whole picture, I’m happy.”

Your ticket for the: Living life as a nun in the new millennium

Living life as a nun in the new millennium