On the day when the Catholic Church celebrates the Feast Day of St. Vincent de Paul, the Vincentian Family, with its 170 branches present in 158 countries and over 4 million members in five continents, remembers him together with the musical group, Gen Verde. The group will hold a concert at 3 PM EDT that will be livestreamed on YouTube at the following link: https://youtu.be/WyMHyK-L-TU

“Our original plans were different,” explains Sally McAllister, manager of Gen Verde. “In fact, we should have been in the U.S.A. during these days for a tour that would have us perform several concerts with the help from our Vincentian friends and the Focolare Movement. Since the pandemic has blocked everything, we decided to overcome this obstacle by performing a virtual concert ー on the weekend that would have marked the start of the tour ー thus involving many more people not only present in North America, but also all over the world.” 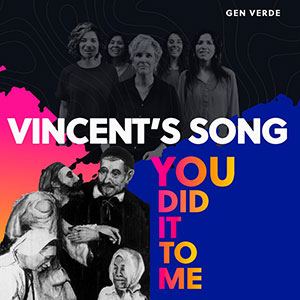 Together with a team from the Vincentian Family Office in the United States, Gen Verde has created this special event that marks the beginning of something new. The Focolare Movement and the Vincentian Family are working together on a project that will promote the strength of unity that springs from their charisms at the service of all humanity.

The “One in Hope” concert will not only include songs, but also testimonies on the themes of solidarity and universal fraternity. The idea for the event on Sept. 27 at 3 p.m. Eastern was born from the canceled live concert and the occasion for Gen Verde to write a song in honor of the founder of the Vincentian Family. “The story of St. Vincent de Paul struck us very much,” explains composer Nancy Uelmen. “In particular, how he was able to look beyond appearances to discover the face of God in the poor. This discovery was the call for him to encounter Jesus in the poor. In the song lyrics ー written in the first person as if it were St. Vincent de Paul himself speaking ー we perceive the same gaze of the Good Samaritan (of which the Gospel speaks) when he sees a person in need, he does not walk by them with indifference, rather he stops and helps them. It seemed like a very contemporary message: everyday life is so frenetic and fleeting that there is an extreme need for all of us to learn to live this same spirit.”

“Vincent’s Song (You Did It To Me)” is a song with an upbeat electronic sound and catchy rhythm. The style of music was a definite choice on the part of Gen Verde, so as to not only engage with young people, but also to express the sense of urgency that St. Vincent de Paul always had in his desire to go out and help the poor.

For those who want to listen to the song, “Vincent’s Song (You Did It To Me),” click this link:
https://imusiciandigital.lnk.to/YF7bADntEM

The concert will begin at 3 p.m. Eastern time.

Watch this video to learn more about Gen Verde and the Start Now Project:

Your ticket for the: Virtual Concert for Feast of St. Vincent de Paul