May 12, 2016
No comments yet
News, Sisters of Charity of Cincinnati 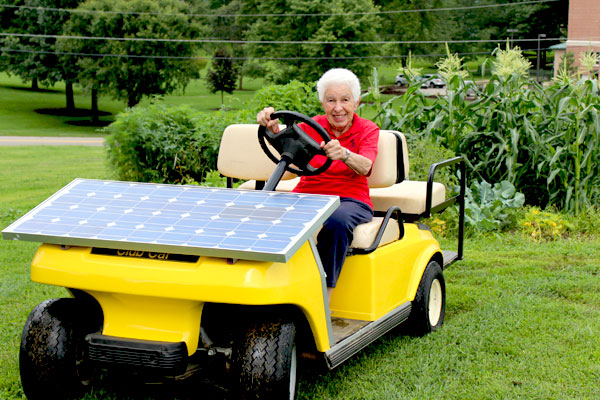 Paula Gonzalez, Sisters of Charity of Cincinnati, grew up in a rural community near Albuquerque, New Mexico. Paula noted that both her parents were teachers but also raised all of their own fruits and vegetables for the family so from a very early age she took an interest in the environment. She remembers that her father always told her “La tierra es bendita” (The earth is blessed) and that became integral to her spirituality. She holds a B.S. in Biology, a M.S. in General Physiology and a Ph.D. in Cellular Physiology.

A defining moment in her life was when the first pictures of Earth became available from space. From that moment forward Sister Paula has committed herself to environmental sustainability. She looked at property on the Motherhouse campus and determined that an old chicken coop could be turned into sustainable housing. Over a three-year period with 35 volunteers, multiple yard sales, and “junk” hauled from homes, schools and dumps to be recycled as floors, doors, cabinets and appliances, La Casa del Sol (House of the Sun) was completed in 1986. The house is a model of energy efficiency using solar energy and a wood-burning stove for heat. According to Sister Paula, “Given the finite nature of Earth and its resources, it’s essential that we make energy alternatives tangible.” “If someone says ‘Solar doesn’t work in Cincinnati’ we can point to La Casa and say, ‘Oh yes it does.” Sisters Paula and Mary Bookser continue to live in La Casa.

EarthConnection, Cincinnati’s first hands-on center for learning conservation techniques completed in 1995, began as a dream for Sister Paula following the Chapter of 1990. In writing the SC Vision Statement the Sisters challenged themselves to “live simply in a complex world, committed to the healing of our global home,” and to “risk being prophetic in church and society.” Like La Casa, EarthConnection was built with the help of many volunteers, multiple yard sales and “junk”. Paula envisioned EarthConnection as a center for learning and reflection about living lightly on Earth.

Sister Paula has been a leader in the fields of alternative energies and environmental sustainability. Her prophetic voice has challenged thousands of religious and others throughout the country to make the connection between spirituality and sustainability. She believes that religious today must review the vows in the context of the signs of the times.

She noted that for many years religious served in traditional education, health care and social service institutions but that today those fields need to be viewed as interconnected and through the lens of a planet in peril. “Mental and physical health,” she said, “are deeply affected by the state of the planet.” Hurricanes, tornadoes, tsunamis, etc. are the cause of multiple health-related illnesses. She sees the need for “appropriate education that leads to advocacy; the need to move from the head to the streets.”

“Women religious need to look at what the vows are calling us to at this point in time, especially poverty,” she said. She calls the moment in which we live a “moment of transformation”; a time to recognize that science and theology are not two separate entities but integrally related; a moment that is calling us to co-create a different world. She resonates deeply with the words of Judy Cannato, “May each of us participate fully in a personal evolution that transforms us and transforms our world.”

Story written by Sister Caroljean Willie SCC, program director of EarthConnection, an ecological ministry of the Sisters of Charity of Cincinnati. This story originally appeared in the second second edition of the Charity Earth Network Newsletter. The Charity Earth Network is an organization of Sisters and Associates who are interested in reflecting on ecology and sustainability from the perspective of the Vincentian/Setonian charism, sharing information and resources, and supporting one another in advocacy efforts for a more sustainable Earth.

Your ticket for the: Environmental Sustainability and Women Religious