August 24, 2020
No comments yet
Daughters of Charity of St Vincent de Paul, News 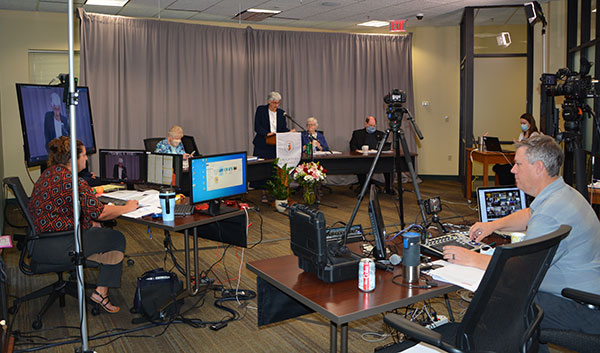 In past years, for provincial meetings and assemblies, the Daughters of Charity Province of St. Louise (St. Louis, Missouri) has taken advantage of technology and “gone live” with segments. It also has videotaped, for playback by non-attending sisters, parts of meetings. This year, for the first time and because of health concerns and travel restrictions due to COVID-19, the province held an all-virtual Zoom video meeting for its Provincial Assembly.

Prior to the opening of the assembly, two new councillors were installed—Sisters Ellen LaCapria and Denise LaRock. Sister Marie Raw, general councillor, joined the installation through Zoom from the Daughters’ motherhouse in Paris.

Later, Sister Catherine Mary (Katie) Norris opened the assembly. Sister Katie, along with the province director and councillors, all were stationed in what became known as the “hub” located in the provincial office’s largest conference room. Set up as a min-television news studio, the assembly was hosted from there. For the installation of councillors and celebration of the liturgy, as many as 240 sisters on separate devices joined the Zoom video meeting. At other times, only the voting delegates (127) were present.

For weeks leading up to the virtual assembly, Daughters participated in practice Zoom video meetings as well as practice voting sessions—all in an effort to put the new technology behind them and the assembly business in front of them.

Your ticket for the: Daughters of Charity goes virtual for assembly