Day 2: Creating a Shared Future — Now is the Time

Florence outlined the process for the meeting, reminding the leadership of the Intentions: “ Through contemplative dialogue and deep listening we, as Federation will:

Continue to identify and honor the diversity among us
and
Create an environment in which we can be free to dream and shape the future of Charity. 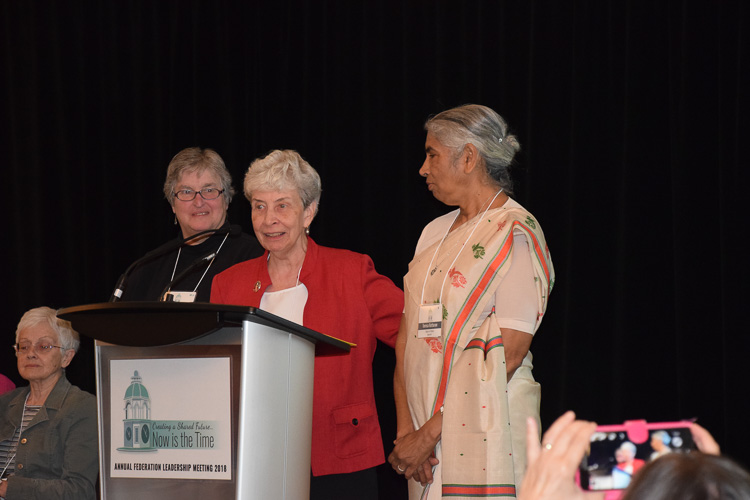 Teresa Kotturan, SCN, the United Nations NGO representative from the Federation, presented her annual report, The Charism of Charity and Sustainable Development – A Spiritual Development. Citing the Federation’s Vision Statement, S. Teresa called the Federation to encounter the now through the lens of the sustainable development goals, Laudato Si’, prophetic presence and witness in order to realize the reign of God. She challenged the Federation to be on fire with the Charism of Charity to birth a new world order. A panel of NGO liaisons – Marion Sheridan, CSM, Joetta Venneman, SCN and Maureen O’Brien, SCSH – reported on the individual and corporate ministries of their congregations. When asked about one sustainable action that the Federation congregations might take, the panel recommended contemplative dialogue that would include Laudato Si’ and/or sustainable development goals. The work and commitment of S. Teresa and the NGO liaisons were recognized and acknowledged by S. Grace and the Federation. 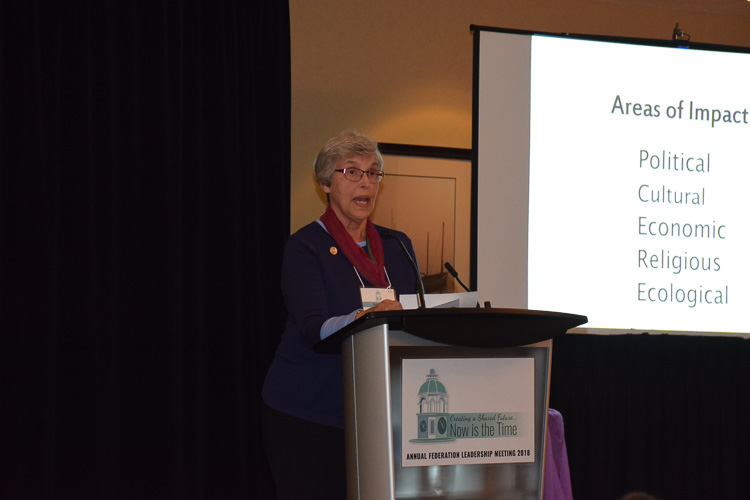 After lunch and faith-sharing, Joan Cook, SCC presented the 2018 Presidential Address.  She addressed three topics: the realities we find in today’s world that provide the context in which we live, love and serve; how the Federation members are living into our document, Futuring 2017 and Beyond; biblical women as models of hope. S. Joan articulated the ways in which the two goals of Futuring 2017 and Beyond have been realized in the past year. In particular she mentioned the trip to Korea by the Federation Board and planning for the Assembly of the Whole in 2019. S. Joan recommended several Biblical women who might serve as models for us as women of hope. Those women included Pharaoh’s daughter, Naomi, Hannah, the widow of Zarephath, Mary and Prisca, “who quietly and anonymously lived courageously in order to show us the way.” She ended by challenging the Federation “to make creative choices to step into the future as women of undaunted hope and faith in the footsteps of these women, Louise, Vincent and Elizabeth and all on whose shoulders we stand.” 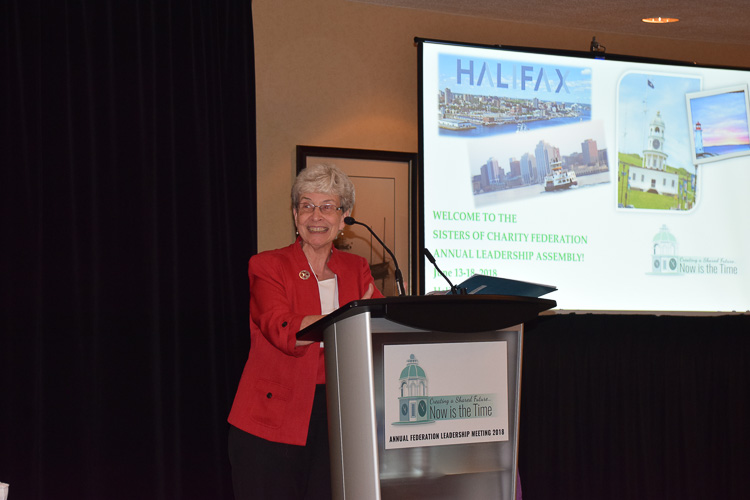 Grace also announced the three committees formed in light of Futuring 2017 and Beyond: the Laudato Si’ committee, the Futuring Initial and Ongoing Formation committee, and the Better Engagement of International Members committee. Noting that Now is the Time, Grace invited the Federation to consider a proposal from CCFP concerning a collaborative vocation and formation program. The Federation leadership teams will discuss the proposal and make recommendations for the Board to consider as they reflect, discuss the proposal during their October meeting. S. Grace concluded her report by thanking the Board and all who have welcomed her throughout her first year as Executive Director. 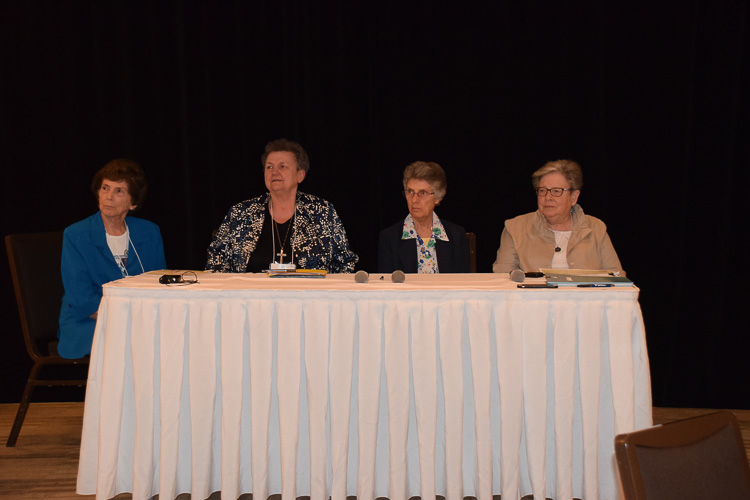 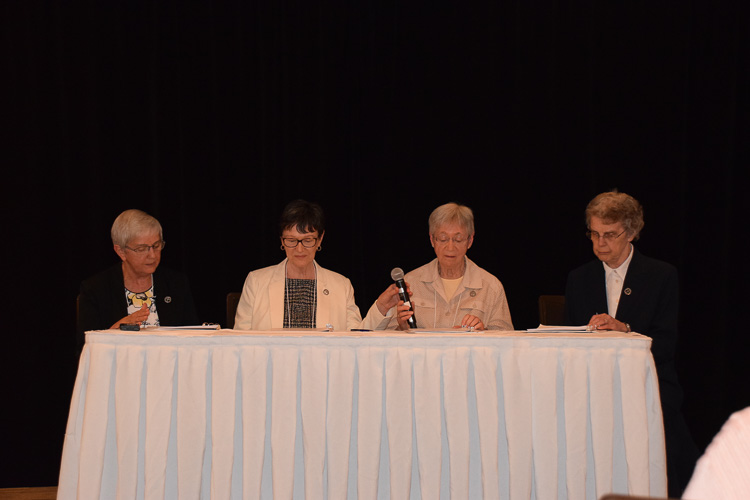 Following the report of the Finance Committee, the Sisters of St. Martha of Prince Edward Island, the newest member of the Federation, presented their history and charism, The Tale of a Tiny Grain of Mustard Seed. The Marthas of PEI were welcomed warmly to the Federation with a standing ovation.

The day concluded with dinner followed by “Maritime HERitage in Song” presented by local musician and storyteller Rosalee Peppard. 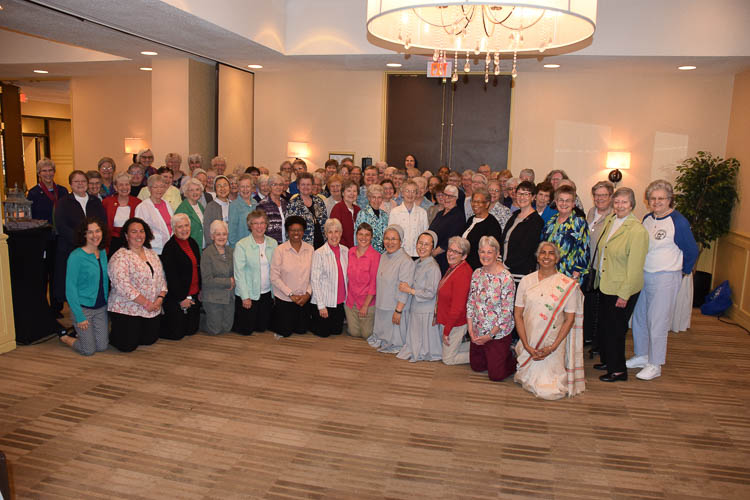 Your ticket for the: Day 2: Creating a Shared Future — Now is the Time

Day 2: Creating a Shared Future — Now is the Time