December 19, 2016
No comments yet
Daughters of Charity of St Vincent de Paul, News 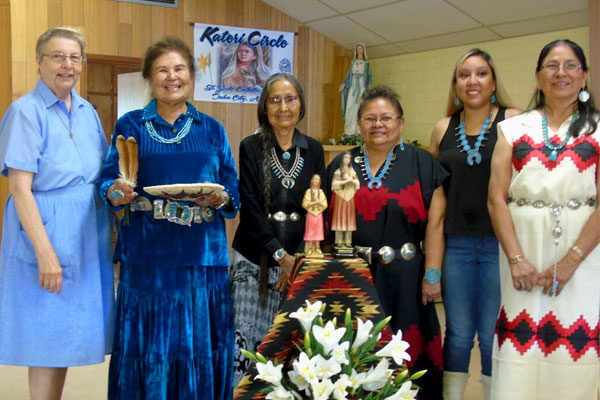 Meet Sister Catherine France. She ministers as the Director of Parish Outreach at St. Jude Church in Tuba City, Arizona. Since January of 2015, Sister has spent much of her time visiting parishioners at home or in the hospital, praying with them or simply keeping them company. Sister Catherine also serves as the spiritual advisor for the parish and regional Society of St. Vincent DePaul. She is one of six Daughters of Charity currently serving Native American populations in the Southwestern part of the United States.

Formed in 1940, the Diocese of Gallup was designed specifically to minister to Native Americans throughout seven reservations in Northeastern Arizona and Northwestern New Mexico. Covering approximately 55,000 square miles, the diocese includes five social centers, 13 schools, and 53 parishes, creating ample opportunities for involvement. It was in 1996 that the first Daughters of Charity moved here to begin new ministries.

At the time, three sisters arrived in Tuba City, AZ— located on the northwest corner of the Navajo Reservation—and began working with the Vincentian priests at St. Jude Church in Tuba City and Immaculate Heart of Mary Church in Page, AZ. Two additional Sisters lived in Gallup, NM, serving as the Director and Co-Director of Catholic Charities for the Diocese of Gallup.

Many years later, the Daughters of Charity from the two United States Provinces are still active within the diocese—four who hail from the Province of St. Louise but who are temporarily assigned as members of the Province of Los Altos Hills while on mission in the Southwest, and two from the Province of Los Altos Hills. Currently, there are six Sisters residing within the diocesan borders—three in Tuba City and three in Gallup. Each Sister has her own ministry, aimed at assisting the Native Americans who call this area home.

Currently living in Tuba City, Sister Mary Frate was one of the first Sisters to arrive in the Diocese of Gallup in 1996. After leaving to serve elsewhere in 2001, she returned in June 2012 and now serves as the Pastoral Assistant to Father Jay Jung, C.M., at St. Jude Church and Our Lady of Guadalupe Church, located 70 miles east of Tuba City in Kayenta, AZ. Father Jung appreciates the work being done in the diocese and has a special gift for listening and relating comfortably to the native cultures in the two parishes that he pastors.

“The challenge for those of us that come here to minister is to listen to the people, to respect their choices, their traditions, and their dreams without imposing our personal values,” Sister Mary says. “Sometimes, in our eagerness to help or to fix things, we want to give money…however, this often merely creates an unhealthy dependency and does not help people move forward in their lives.”

Sister Elizabeth Riddell is the third Sister residing in Tuba City. For the past two years, she has worked as the director of St. Jude Food Bank. In her role, she oversees daily operations, including supervising the staff and forming them the Vincentian charism of service. Additionally, Sister Elizabeth assists in meeting the primary goal of the food bank—to help locals to become self-sufficient by offering budgeting tips and healthy eating alternatives. She does so by studying the root causes of poverty in the area and working with other local community organizations to craft new ways to provide assistance to those in need.

Three hours away in Gallup, NM, Sister Elizabeth Racko performs her primary ministry at local prisons. Sister Elizabeth is no stranger to the diocese as she has served in the Diocese of Gallup for almost 20 years. During this time, she has spent significant time in prison ministry in Tuba City before continuing it in Gallup. Sister Elizabeth makes regular visits to the Gallup Jail and the New Mexico State Women’s Prison and the Federal Detention Center for men destined to be deported to Mexico; but perhaps more importantly she trains volunteers to visit the prisons regularly and provide Catholic prayer services to the inmates. In this she includes attention to the Native American and Hispanic cultures in the prison populations and promotes Restorative Justice in each. Sister also maintains a large spiritual correspondence with inmates in many different prisons and trains volunteers for this ministry also. She spends much of her time outside of the prisons advocating for prisoners’ rights.

The fifth Sister serving in the Diocese of Gallup, Sister Catherine Clemons has been doing so since August 2012. Sister Catherine serves as a Volunteer Teacher and Teacher Aid at two schools on reservations, St. Michael’s Indian School and St. Anthony School. At St. Michael’s, Sister Catherine splits her time between the first and second grade classrooms, working with the teachers as well as the students. Recently, she has helped with improving transition time from one subject to the next, discipline, and one on one academic help with the students. Her time spent at St. Anthony School is focused solely around the children. Here, Sister Catherine works in the pre-kindergarten classroom teaching religion lessons, building a curriculum, and performing all of the children’s Kindergarten Readiness Screenings.

“To work in these two schools, with two very different tribes is truly a learning experience for me. I feel so very blessed to have been so accepted by the people of both tribes,” Sister Catherine says about her ministry. “I feel enriched being present among them. I thank the Lord every day for allowing me to serve Him here. It is truly a beautiful, blessed and sacred place to be in ministry. I have no desire to be anywhere else.”

Story adapted from the Faith Afire Fall 2016 magazine published by the Daughters of Charity of St. Vincent de Paul Province of St. Louise.

Your ticket for the: Daughters serving Native American populations in the Southwest