March 20, 2020
No comments yet
Daughters of Charity of St Vincent de Paul, News 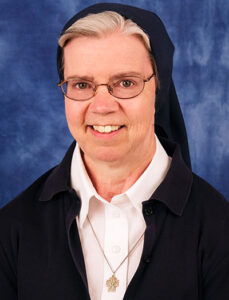 A Mass of Christian Burial for the Superioress General of the Daughters of Charity Sister Kathleen Appler, DC, will be celebrated Tuesday, March 24, 2020, at the Chapel of Our Lady of the Miraculous Medal, 140 rue du Bac, Paris, France. Sister Kathleen died on March 18, 2020, at the Daughters’ motherhouse in Paris following a long, courageous battle with cancer. She was 68 years of age and 47 years of vocation as a Daughter of Charity of St. Vincent de Paul.

Sister Kathleen was elected Superioress General of the worldwide community at the general assembly of the Daughters of Charity of St. Vincent de Paul on May 25, 2015. She was the first American and only the second non-French Daughter to be elected Superioress General. In August 2019, she was named to the Vatican’s Congregation for Institutes of Consecrated Life and Societies of Apostolic Life by Pope Francis. At that time, the Holy Father named six superiors of women’s religious orders, a consecrated laywoman, and the superior of the De La Salle Christian Brothers to be full members of the congregation. Previously, the members had all been men.

Born in Utica, New York, on Feb. 23, 1952, Sister Kathleen (baptized Kathleen Mary) was one of 10 [6 girls and 4 boys] children born to George and Mary (Fahy) Appler. She was a 1970 graduate of Utica Catholic Academy, Utica, New York. In April of 1973, Sister entered the Daughters of Charity from St. Paul’s Parish in Whitesboro, New York. Sister served in education, administration, and vocation and formation ministries. She served in schools in Syracuse, New York, (Cathedral School, 1974 to 1975); Bridgeport, Connecticut, (St. Ann’s School, 1975 to 1979), Utica, New York, (Our Lady of Lourdes School, 1979 to 1982 and 1985 to 1995); and Wilmington, Delaware, (St. Peter’s School, 1982 to 1985). Sister Kathleen served at St. John’s Parish Center, Brooklyn, New York, from 1997 to 1999. Sister then moved into governance in the Daughters’ former Northeast Province in Albany; she served there until her 2009 appointment as the English Speaking General Councillor for the Daughters in Paris for a six-year term. Sister Kathleen earned her Associate of Arts Degree in Liberal Arts from Maria Regina College, Syracuse, New York, in 1975; her Bachelor of Arts Degree in English Literature with a Concentration in Elementary Education from Sacred Heart University, Bridgeport, Connecticut, in 1978; a Master’s in Elementary Education from State University of New York at Cortland, Cortland, New York, in 1984; and her Certification in Spiritual Direction from the Center for Spirituality at Work, Denver, Colorado, in 2006.

Sister Kathleen was preceded in death by her parents; and her brothers, George and John Appler. She is survived by her family of Daughters of Charity throughout the world, and many Applers including brothers, Jim (Cheryl) Appler of Lincolnwood, Illinois; and Daniel (Robyn) Appler of Whitestown, New York; sisters, Susan (Steve) Bassi of Rome, New York; Deborah Appler of Yorkville, New York; Linda (Tim) Voorhis of Rome, New York; Donna Appler (Jerry Swarthout) of Marcy, New York; Diane (Dale) Brown of Lexington, Virginia; sister-in-law, Jacqueline Appler (Bill Ross) of Westmoreland, New York; 20 nieces and nephews; and many great-nieces and nephews.

Celebrations of Life Memorials will be held at Our Lady of Lourdes Church in Utica, New York, and at the St. Louise House Chapel of the Daughters in Albany, New York, when the restrictions due to COVID 19 are lifted.

Your ticket for the: In Memory of Sister Kathleen Appler, DC