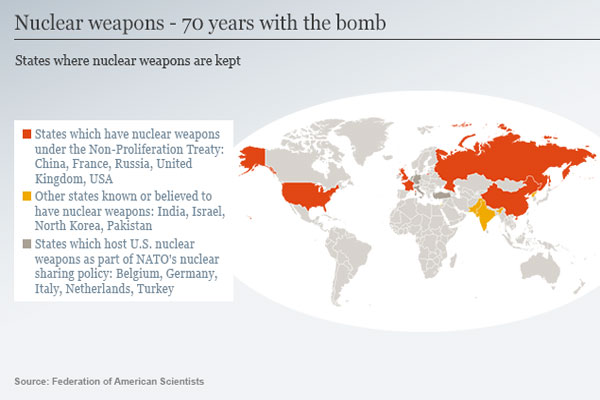 One-hundred-twenty-two Member States of the United Nations voted to adopt a Treaty for the Prohibition of Nuclear Weapons on July 7, 2017. It is the first legally binding international agreement to comprehensively prohibit nuclear weapons, and it may eventually lead to their total elimination. All the nine nuclear armed countries and their allies – NATO, Japan, Australia and South Korea did not participate in the negotiations.

The Treaty for the Prohibition of Nuclear Weapons does emphasize the catastrophic humanitarian consequences that would result from the use of nuclear weapons. By the terms of the treaty, each State party would never, under any circumstances, develop, test, produce, manufacture, otherwise acquire, possess or stockpile nuclear weapons or other explosive devices. In addition, States parties would never transfer such weapons or devices; use or threaten to use them; or allow them to be stationed, installed or deployed on their territory. While it prohibits nuclear weapons, it provides a pathway for states with nuclear weapons to join and destroy their nuclear arsenals.

The Treaty will open for signature at UN Headquarters on September 20, and enter into force 90 days after the fiftieth instrument of ratification, acceptance, approval or accession is deposited with the Secretary-General.

As conflicts and wars continue to be waged in different parts of the world without any resolution in sight, it is the duty of all peace loving citizens and world leaders to focus on developing a new concept on international security and eliminate nuclear weapons. It’s not just about peace. It’s about the survival of all life on earth.

Read the full Treaty for the Prohibition of Nuclear Weapons here.

Your ticket for the: UN negotiated Legally Binding Treaty Banning all Nuclear Weapons