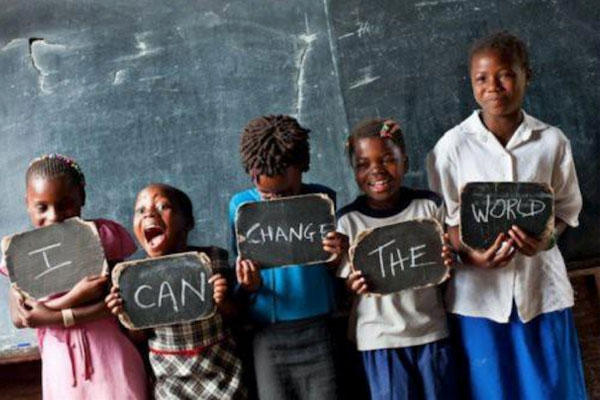 Girls were among persons “left behind” by society in the time of St. Louise de Marillac. According to “Louise de Marillac: a Committed Woman,” [1] Louise took interest in educating poor country girls while others were unconcerned. Richelieu stated (in his last testament) that such education was useless and even dangerous because it might divert them from their domestic responsibilities.

Louise wanted girls to have a solid foundation for life. She instructed girls when visiting Confraternities. She would then seek a woman able to continue educating them. After founding the Daughters of Charity, she encouraged sisters to become literate and arranged the formation of some as teachers so that they could instruct the girls.

Like Louise, the United Nations recognizes the value of nurturing girls to reach their full potential. UN Resolution 66/170 states: “Empowerment of and investment in girls are key in breaking the cycle of discrimination and violence and in promoting and protecting the full and effective enjoyment of their human rights.”

International Day of the Girl Focuses on Data

Today, in keeping with Resolution 66/170, the UN honors the fifth annual International Day of the Girl on October 11. The theme for this year’s event is Girls’ Progress = Goals’ Progress: A Global Girl Data Movement. According to UNICEF, collecting and analyzing girl-focused data enables decision makers to measure and understand opportunities and challenges girls face. Data also influences policy and program decisions.

During Girls Speak Out, scheduled for the afternoon of October 11, girls will inform UN officials and governmental leaders about the amazing work they’re doing globally to promote human rights. An 11 Days of Action Campaign runs from October 1 to October 11. The Campaign addresses progress since the International Day of the Girl was first honored, and highlights goals for girls’ human rights globally. Each day of the campaign focuses on a different topic with a targeted Twitter chat. The days are sponsored by various organizations to promote social change and increase participation.

October 6 marked the launch of the IDG16 Brochure, which includes global statistics (and gaps in SDG 5 gender data) on girls’ issues addressed in the Sustainable Development Goals. SDG Goal 5 is to: Achieve gender equality and empower all women and girls. According to the UN, gender equality is not only a fundamental human right, but a necessary foundation for a peaceful, prosperous and sustainable world. Key components of SDG 5 which relate to girls are:

We’ve come a long way since Louise de Marillac advocated for girls. Examples of progress can be found in Southern Asia, where, according to the UN, only 74 girls were enrolled in primary school for every 100 boys in 1990. By 2012, the enrollment ratios were the same for girls as for boys. About two thirds of countries in the developing regions have achieved gender parity in primary education. But many girls still remain significantly disadvantaged, face discrimination, deprivation, and are subject to violence.

Read more about GIRLS AND EDUCATION, GIRLS AND POVERTY, GIRLS AND CHILD MARRIAGE, GIRLS AND FORCED LABOR/HUMAN TRAFFICKING, GIRLS AND FEMALE GENITAL MUTILATION, OTHER VIOLENCE AGAINST GIRLS, and DANGERS FACED BY GIRL REFUGEES AND MIGRANTS.

Creative world-wide efforts are demonstrating that the gender gap can be narrowed. According to the UN Girls Education Initiative (UNGEI), an initiative in Egypt provides food rations, such as rice and oil, to girls who attend 80 percent of school days receive food rations. The food assists with family needs. A math camp for girls in the Dominican Republic fueled girls’ dreams that they could become accountants and engineers, according to UN Women News. In June 2015, a Malawian chief annulled 330 customary marriages – of which 175 were girl wives and 155 were boy fathers, as a means of encouraging youth to return to school, and continue a healthy childhood.

Let’s follow in the footsteps of St. Louise and give girls a chance by promoting programs and policies which empower them.

Your ticket for the: UN Joins in Making Girls Count