Sisters of Saint Martha have a new home 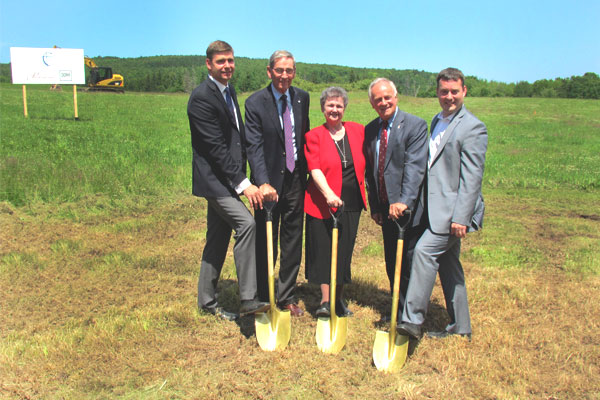 New Facility to be built across from the present Motherhouse

After a lengthy and thorough process, the Sisters of Saint Martha are now able to move forward with a permanent solution for members of their congregation currently living in long term care at Bethany Motherhouse.

The Sisters of Saint Martha currently hold the license for 25 long term care beds occupied by members of their congregation. The Construction of a new facility solves their safety problem of residing in an un-sprinklered area. There are also a number of sisters requiring assisted living and independent living with services.

“We are pleased to be entering into an agreement with Shannex,” said Congregation Leader Sister Brendalee Boisvert. “We see this arrangement as unique, as Shannex can offer multiple levels of care in one campus, allowing our congregation to stay together. They also have a successful history of community partnerships just like this one.”

An organization with 28 years of experience, Shannex’s signature campus model is a well-established proven concept which offers a full continuum of care and service. Shannex has similar partnerships with the Sisters of Notre Dame in Sydney, the Sisters of Charity in Halifax and Les Filles de Jesus in Riverview, NB.

“We understand the challenges the Sisters of Saint Martha were facing with a building with an interim license and one that their frail population could not manage, we have seen this before,” said Jason Shannon, President and COO of Shannex. “We approached them with our campus model and we are happy to be working on this project together.”

In the summer of 2016, construction will begin on a residence with 25 long term care beds, 19 rooms for assisted living, 22 rooms for independent living with services and 3 guest rooms. There will also be an additional floor of approximately 20 rooms of Independent living for the general public. The facility is to be built on the land just across from the present Motherhouse. If all goes well, the Sisters could be moving into the new facility by February of 2018.

At the press event on Tuesday, July 12, Sister Brendalee offered some insight into the historical significance of the day and extended her thanks to a great number of people for their prayers and support:

On the final day of their retreat, July 12, 1900, Archbishop O’Brien summoned the Marthas from the Diocese of Antigonish to the Sisters of Charity Motherhouse Assembly Hall in Halifax. He informed the sisters who had come from the Diocese of Antigonish that their Bishop was prepared to receive them and establish them into a Diocesan Congregation. If any were unwilling to assume this undertaking they were left perfectly free to remain with the Sisters of Charity.

He called for volunteers saying, I give my blessings to those who go to Antigonish and to those who choose to remain with the Sisters of Charity. After a short pause he asked for volunteers to stand if they were willing to join Bishop Cameron’s proposed new Congregation. Marthas courageously rose to their feet. (Thirteen then and two who were not present that day joined later) This was a pivotal moment in the history of the Sisters of St. Martha. They were convinced that God was calling them to form a new foundation in Antigonish.

Today, July 12, 116 years later in our Assembly Hall we are once again called to stand together as we move into a new unknown moment in our future. We are being called to live in a facility that will be owned and operated by the Shannex Company. We believe that this move is well planned and that Shannex will be able to provide for our long term care replacement beds as well as our need for Assisted Living and Retirement living.

This move will allow us to remain together as a community, live on our property and visit our cemetery, lessen our carbon footprint, reduce our costs, share this facility with the general public and enhance the community of Antigonish, and have a solution to an aged infrastructure that is too large for our needs and too expensive to renovate or operate.

We are grateful to the many people who supported us throughout this lengthy process…our consultants, members of the Bethany Complex Planning Committee, Jerome Sullivan and staff, Past and Present Leadership Teams and especially the prayers of the many Martha Sisters who sustained us on days when we wondered if this was actually going to become a reality.

We are most grateful to Minister Glavine and all those in the Department of Health and Wellness with whom you worked to help move this project forward. Thank you as well, Minister Delorey and Premier Stephen MacNeil for supporting this project. We also need to name members of former government parties who supported us in moving forward, namely Angus Mac Isaac, Sheryl Doiron, Darrell Dexter, Maureen MacDonald and Mo Smith. They did their part to keep this conversation active during their terms of office.

Thank you most especially Jo and Jason Shannon and the Shannex Team. Ever since you offered to build this home for us you have made time to meet with us, listened to us and continued to believe that we could work together on this important project for our future.

Indeed, this is the day that the Lord has made, Let us rejoice and be glad. We look forward to walking together with the Department of Health and Wellness, and members of the Shannex Team into a future filled with possibility.

Your ticket for the: Sisters of Saint Martha have a new home

Sisters of Saint Martha have a new home