January 4, 2017
No comments yet
News, Sisters of Charity of New York 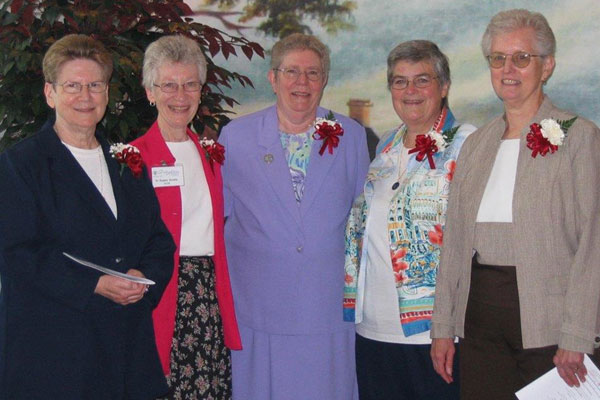 The Seton Writings Committee received the Seton Legacy award in 2009 at a ceremony in Emmitsburg.

Six Sisters of the Federation have dedicated years of work to document the story and legacy of Elizabeth Seton whose feast day is January 4. We recognize and thank the women of Seton Writings Committee!

Sisters Regina Bechtle SCNY, Betty Ann McNeil DC-St. Louise, Vivien Linkhauer SC-SH, and Judith Metz SC-Cinti (with many years of assistance from Sister Kathleen Flanagan SC-St Elizabeth and Sister Anne Harvey SC-H) have worked since 2000 to gather chronological documents written to and about Elizabeth Ann Bayley Seton and the Seton and Bayley families. These sisters collaborate with each other, the Federation and other archivists, translators, historians and researchers in and beyond the Vincentian Family.

“When Elizabeth Seton founded the Sisters of Charity of St. Joseph in 1809, many of the major players in the U.S. Catholic Church were involved,” Sister Regina said. “The importance of her role and the role of the Sisters in the American Church hasn’t always been given its place. It’s rewarding to know that the Seton Writings Project is contributing to re-shape that story, as a number of researchers have already told us.”

The discovery and compilation of thousands of pages of documents about Saint Elizabeth has led to a richer understanding of Elizabeth Seton’s life, early community histories, and the historical significance of our pioneer congregations in the North American church and society.

The first phase of the Seton Writings Project was a four-volume collection of Elizabeth Ann Bayley Seton’s writings, which were published between 2000 and 2006, as well as the publication of multiple scholarly articles and documents. The project committee researched and published a comprehensive edition of letters, journals, notes, translations, and other writings of Elizabeth Seton.

“It was a huge thrill to bring the entire body of Elizabeth’s writings to birth and to see the last volume published in 2006!” Sister Regina said. “But even then, we knew that the other side of her correspondence – those who wrote or replied to her – was needed to flesh out the story. So we began to work on letters to and about her.”

The Seton Writings Project is now in its second phase, which includes collecting letters to and about Elizabeth Seton, her family, community members, her advisers and others. The Project Committee has identified over 1,000 documents written from 1767 through the 1860’s, as well as much undated material, stored in archives across the United States and Canada.

“We’re working with documents identified by the 20 or so archives that we’ve contacted over the years,” said Sister Regina. “Our first goal is to list those documents in such a way that researchers in American church history will find them useful. There will always be discoveries of previously unknown documents, but other researchers will need to handle them.”

As a first step, a chronological chart of documents and their archival locations is being made available digitally. Members of the Project Committee are compiling charts listing date, sender, recipient, letter location, and the letters’ first line. As charts are completed, DePaul University’s Vincentian Heritage online library is publishing them. Researchers will find these digital charts helpful in locating materials relevant to the spread of the Vincentian charism in the United States, the early American Church, and the beginnings of the Sisters of Charity in America.

When all the charts are completed, the next part of the work will be to prepare footnotes and annotations for each document, verify that transcripts are accurate, and post the transcripts on the online DePaul University Library site.

“We never imagined the years of tedious, detailed and often hidden work it would take, but we know that the work will have lasting value,” Sister Regina said. “We hope that it will inspire a younger generation of scholars to take up the research.”

Within the next two years, Sr. Regina and the project committee hope to add 500 more documents to the collection. You can view the collection of work online through DePaul University’s Vincentian Heritage Collection at: http://via.library.depaul.edu/seton_stud/

The multi-year Seton Writings Project is supported by the Sisters of Charity Federation, with the able assistance of DePaul University’s Vincentian Heritage online library. 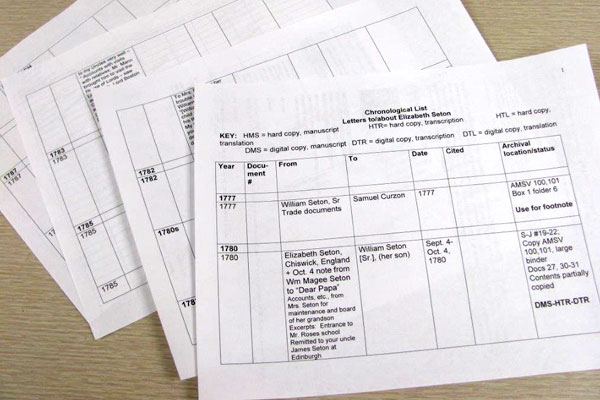 Your ticket for the: Seton Writings Project helps to spread Saint Elizabeth’s legacy