March 9, 2018
No comments yet
News, Sisters of Charity of Saint Elizabeth 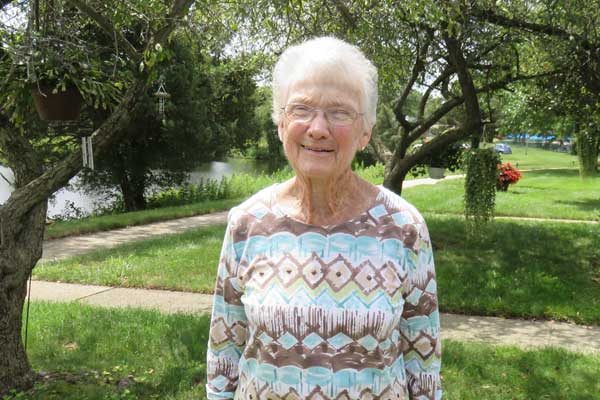 “Courage, Hope, Change, Journey … Toward Boundless Charity.” These words appear below a picture of a nautilus as the chosen symbol of the 2015 General Assembly of the Sisters of Charity of Saint Elizabeth. The words are also a fitting subtitle for a story about Sister Peggy Nulty. Sister Peggy has served over 60 years in ministries that have evolved in ways she could have never foreseen when she began as a Sister of Charity. With passionate commitment to the mission of boundless charity, she welcomes the stranger and gives of her substance to make life better for others.

Peggy grew up in Somerville, New Jersey as the oldest of four children in her family. She always loved school and remembers wanting to become a teacher from a very early age. Because there was no Catholic grammar school in Somerville at the time, she attended public school before enrolling in St. Peter’s High School. She says, “Our parents didn’t give us a choice. Catholic high school, since it was available, was the only option.”

Ninth months after graduating from high school, Peggy entered the Sisters of Charity. Looking back on it, she is very thankful that she waited a few months to enter. She says, “If I had entered in September instead of the following March, my life in the community would have been totally different.” Unlike Sisters who entered earlier and were sent out to teach almost immediately as postulants, Sister Peggy’s entering band was allowed to remain at Convent Station and complete most of the requirements for a degree from the College of Saint Elizabeth before being missioned to a classroom. “The leaders of the Sister formation movement at that time were saying that Sisters should be well prepared, both academically and spiritually, before being sent out on missions. Our congregation was one that stepped right up to the plate with that.”

Confident in the preparation she received and eager to realize her longtime desire to teach, Sr. Peggy’s ministry in education began as an elementary teacher at St. Teresa School in Summit. This was followed by teaching English at the high school level. The ministry of teaching was demanding but singularly rewarding as Sister Peggy shared her own love for learning with her students. During the summers of these early years, Sister Peggy not only completed the requirements for her undergraduate degree but was able to further her education through summer study at the University of Notre Dame, where she earned a Masters Degree in English.

In 1971, Sister Peggy was asked by her Provincial Superior if she would consider going to St. Thomas in the Virgin Islands to serve as Principal of Saints Peter and Paul High School. After much prayer and reflection, she decided to say yes, even though she had never served as a principal and had never considered a ministry so far from home. She says, “It was probably the most influential mission of my life. My mind and heart were stretched to look at and understand another culture.” Sister Peggy reveled in experiencing Island life, with its festive community celebrations, calypso music, and storytelling. As a first time principal, she appreciated the support of all the teachers who were united in their commitment to provide the students with the best possible education.

After five years in the Virgin Islands, Sister Peggy continued her educational ministries in New Jersey. She served at the high school level until 1979, when she was elected Assistant Provincial of the Sisters of Charity’s Northern Province. Her tenure as part of the leadership team opened her eyes to global needs. “I began to see the larger world. In 1979 when I was elected, we at the General Assembly had issued commitments and affirmations to address global issues and injustice. The one line that jumped out at everybody was to place ourselves on the side of the poor. We asked ourselves how our ministries would need to be different from what went before.” Her perspective was further broadened by serving as Associate Director of the Leadership Conference of Women Religious. She came to learn what other congregations were doing to minister to and with the poor, and she felt increasingly called to some new ministry to meet emerging needs.

She says, “After reflecting and synthesizing, I knew that I needed to be out there and DO something.” She was unsure of the form that her ministry would take, but decided that she should start by learning to speak Spanish and also learning more about what life was really like for people who live in poverty. She served both of these ends by going to live with the Maryknoll Sisters in Bolivia, where she took an immersion course in Spanish and learned firsthand about poverty in the third world.

Shortly after returning to the United States, Sister Peggy was presented with an opportunity to teach English as a Second Language at a public school in Paterson, beginning her evolving ministry to immigrants that continues today. From Paterson, she went on to teach ESL and coordinate the ESL component of the community health education department at St. Mary’s Hospital in Passaic. When the hospital program was closed, she continued her ESL ministry in South Jersey. Today, this ministry is based in the St. Francis Community Center in Lakewood.

Particularly because of her experience learning Spanish as an adult student, Sister Peggy has great empathy for the ESL students who have the courage and determination to tackle a new language. She says, “Learning a new language when you’re older is very challenging. I know what that’s like!” She finds it deeply rewarding to see her students progress. “When you begin an ESL class, some students don’t know a word of English. Then day by day, week by week, the light goes on and the ‘Aha’ moments come. The students are thrilled when they become able to communicate in English.”

Sister Peggy knows that when her students have the competence and confidence to speak English, doors will open to them in the workplace and in the community. She is also gratified when the classes help to break down barriers that often develop in families when older children become embarrassed by their non-English speaking parents. As Sister Peggy gives so much of herself to make life better for immigrants, she quietly fights against the anti-immigrant sentiment she sometime encounters. “We are a country of immigrants. Not to be welcoming and embracing is a betrayal of our founding values and beliefs.”

At the request of the ESL students, Sister Peggy expanded her ministry to include a citizenship program. Through dogged determination and enthusiastic advocacy, she obtained grants to fund citizenship classes and provide individualized help in completing the complex citizenship application. Her citizenship program has an almost 100% success rate. “The students are prepared, and they do pass. It transforms lives.”

In all that she does, Sister Peggy is mindful that “the call to place ourselves on the side of the poor challenges us to give of our substance, not our surplus.” She thanks God for the health and strength to continue working with immigrants to help them learn English and give them hope and opportunity.

Sister Peggy is grateful to be part of a community of faithful women “who always roll up our sleeves and get to work” and who embrace new ministries to meet changing needs. She says, “All through the history of our community, there have been surprises, twists and turns that we could never expect or understand.” With trust in the Providence of God and conviction that the Holy Spirit is alive and well, she looks forward to continuing surprises as boundless charity touches hearts, brings hope, and transforms lives.

Your ticket for the: NCSW Spotlight: Sister Peggy Nulty, Sisters of Charity of Saint Elizabeth