Ministry with the people of Peru

March 26, 2018
1
News, Sisters of Charity of the Immaculate Conception 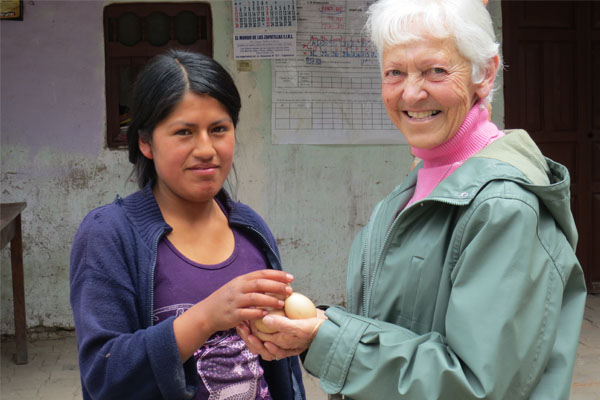 Sister Rita Coumont first arrived to Peru nearly 48 years ago. The Sister of Charity of the Immaculate Conception came at a time of great change in the country, when the military was redistributing land. Her experiences in ministry are as diverse as the places, cultures and people she encountered.

She began her work on the Chincha Baja coast as part of a pastoral care team.

Ten years later she moved to the outskirts of Lima called pueblos jóvenes – an area of great poverty – where she ministered to people living in tents who had left their homes for a better life in the big city.

Nine years later, in 1989, she and Sister Muriel Buckley moved to a rural area of Otuzco, high in the Northern Andes Mountains, where she remained in ministry until the middle of last year – 28 years.

“If you want to have a real flavor of diversity and experiences, visit Peru and you’ll visit a wonderful people,” Sister Rita said. “Each time I moved, it was like going to a different country in a sense of the language, the manner of living, the customs and food.”

Building a ministry with the people of Otuzco

Sister Rita and Sister Muriel ministered among the indigenous peoples of a small village in the province of Cajamarca, called Ventanillas de Otuzco, where one would find ancient Incan ruins. There was zero Church presence in the area when they first arrived.

At the very beginning, the Sisters were involved in adult learning – teaching women and girls. They expanded to collaborate with different groups involved in basic health – and little by little there would be medical posts established – which they would encourage the moms and babies to come to for prenatal care and vaccinations. Bringing water and sanitation to the area was an ongoing project.

The two Sisters of Charity of the Immaculate Conception eventually founded San Lucas parish. Working with the local people, they provided church services, led liturgies, witnessed marriages, baptized children and adults, and encouraged lay leadership. They went to visit the people of the area each week, to pray and be present among them.

“The work was not just bringing people into the church, but a pastoral work which was always strongly concerned with what’s happening all around us socially, and to be involved in the problems and situations of the community. We bring what we are living and we are always conscious of our mission as a promoter of peace, development and good citizenship.”

Sister Rita and Sister Muriel were also involved in helping local farming families through their peaceful protest of international mining operations. They stood in solidarity with the indigenous people against companies which wanted to extract gold from the area – a practice that would destroy the lakes that provide the people with clean drinking water.

“Our faith is not something that is lived within four walls – our faith is social action,” Sister Rita said. “I was fortunate enough from day 1 to be working with people that always did pastoral work with the people rather than for the people.”

Looking back on her time in Otuzco, Sister Rita feels eternally grateful to have been able to take on whatever ministry presented itself.

“I consider it a privilege to have been there for these years,” she said. “It’s made an indelible mark on me. It makes a mark and an appreciation of the goodness of the people and their strength and faith in God and one another. They are of tremendous stamina.”

Sister Rita has now returned to Canada after completion of her ministry. Her return also marks the end of her congregation’s 50 years of mission in Peru. She is one of 20 Sisters of Charity of the Immaculate Conception who have ministered in rural and urban missions on Peru’s Pacific coast, desert, jungle and Andes Mountains.

As a Sister who did most of her traveling by walking and horseback, and learned to live without electricity and running water for many years, life is certainly different in modernized Winnipeg, Manitoba. “Sometimes when I’m in Canada [I feel] I’m in another world,” she says.

She wears an engraved ring on her finger, given to her by the people before she left. The ring is a sweet and constant reminder of the Peruvian community she was part of – all together, all united, all equal, and each appreciated and valued by the other persons.

“Something I’m trying to do back in Canada – instead of hurting and missing this wonderful part of my life, I’m trying to give thanks for the people,” she said. “It’s such a gift to learn of other cultures and other people and appreciate one another. I understand when I step in another’s shoes. In the end we are all one on this one Earth.” 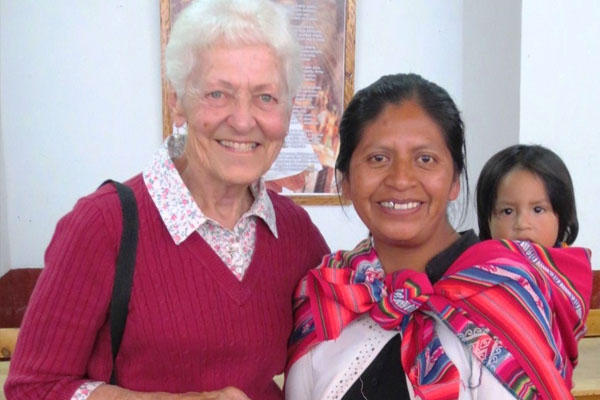 In San Lucas Parish centre in Otuzco –Sister Rita Coumont (left) greets the sacristan, Marina Ilman with her son, Esteban. Sister Rita was the last Sister of Charity of the Immaculate Conception to leave Peru after serving in various missions there since 1970. Her return to Canada last June completed 50 years of SCIC presence and ministry in Peru. (SCIC photo)

Your ticket for the: Ministry with the people of Peru

Ministry with the people of Peru