October 16, 2017
No comments yet
News, Sisters of Charity of Leavenworth 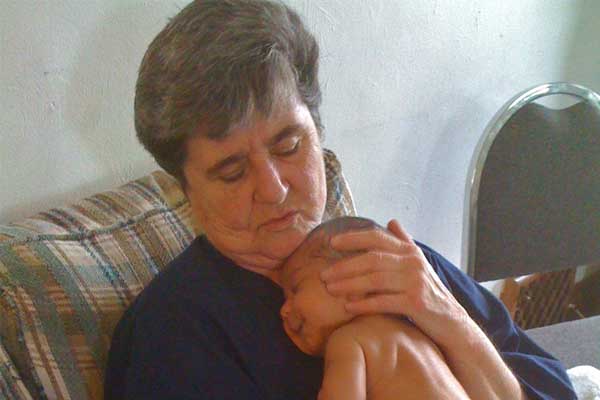 Sister Michael Delores Allegri adores children. It’s no wonder, then, that she’s surrounded herself with children of all ages her entire adult life.

Sister Michael Delores’ career began in 1965 when she first taught high school. She continued in secondary education for 20 years. She left teaching, but felt she was too young to quit working altogether. Fortunately, a new and exciting opportunity presented itself at Mount Saint Vincent.

Denver-based Mount Saint Vincent provides clinical treatment for children with severe emotional and behavioral challenges due to trauma, mental illness, abuse or neglect. Sister Michael Delores was asked to help with the K-8 school’s summer program. “I absolutely loved it,” she recalls. She ultimately was called back to Kansas, but eight years later, she eventually made her way back to Denver. This time, she would stay for good.

Sister Michael Delores always had an interest in providing foster care. So in March 1999, after taking the required training, she welcomed two little girls who came to live with her and another foster mom. Sister Michael Delores was 57 years old at the time. Seventeen years and 65 children later, the 75-year-old Sister of Charity of Leavenworth is still going strong.

When asked what she considers the biggest misconception people have about foster care, she says it’s the belief that children in the foster care system are someone else’s problem. “They don’t understand that children are in foster care through no fault of their own,” she states. “Whether it was abuse or neglect, something was done to these children, and as a society, we have the responsibility to care for and raise these kids.”

Sister Michael Delores believes that foster parenting is a calling, and although not everyone is able to be a foster parent, there are other ways to help. “Anyone can help support foster families in their community; there are many options that are easy to do,” she explains.

Even small tasks like offering to make a meal or run an errand are greatly appreciated. Other ideas include donating diapers and formula or gift cards. “Just the other day, we had a 3-year-old who arrived with the clothes on his back and shoes that were a size too small,” she says. “New children’s clothing is always needed.”

Enough love to go around

The best predictor of foster parenting success is a family’s capacity to love and care for a child. To illustrate, Sister Michael Delores recounts a situation that occurred years ago.

Just after Thanksgiving, a foster family was involved in a terrible car accident; the mother suffered fatal injuries, and the father was paralyzed. Sister Michael knew she couldn’t let a frightened 5-year-old spend Christmas in a crisis center. So she sat her four foster children down and ran through the logistics – there was one more space in the van, there was enough room in one of the bedrooms for another bed, and there was enough space at the dining room table. Then Sister Michael Delores’ 4-year-old foster son piped up, “And we have enough love!” Sister Michael Delores smiled. Because she knew that in the end, that’s really what it’s all about.

Your ticket for the: 65 children, 18 years, 1 Sister of Charity of Leavenworth