August 13, 2018
No comments yet
News, Sisters of Charity of Leavenworth

From start to the finish, the Aug. 1 observance of the 160thanniversary of the founding of the Sisters of Charity of Leavenworth (SCLs) resounded with traditions. Theme for the one-day celebration was “Moments of Grace.” 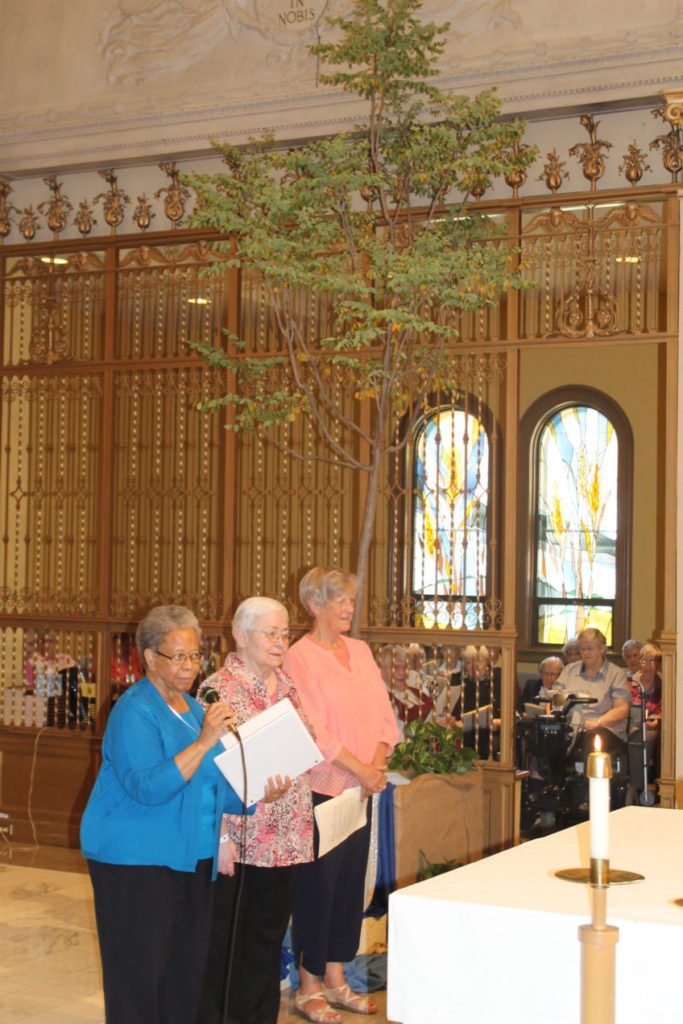 The day began with morning prayer in Annunciation Chapel followed by Mass. The prayer included a tribute to the SCLs read by Sister Nancy Gerth, representing the Sisters of Charity of Nazareth (SCNs), the religious community to which the Leavenworth congregation traces its origin. Sister Nancy read the verse written by another SCN to commemorate the Diamond Anniversary (75th) of the SCLs. Joanne Bodner, SCL Associate, read “Guiding Grace,” her poem selected to reflect the SCL spirit.

In her reflection during the Mass, Sister Melissa Camardo focused on the “yes” said 160 years ago by Mother Xavier Ross, SCL foundress. “If we can say yes again, we will trust in Divine Providence and believe it is God’s work, not just our own efforts,” she said. “We will open our hearts to give and receive. We will hold the suffering and discouragement. We will hold the beauty and excitement of what is still possible. … We will say yes to the hope and the promise of so many more moments of grace yet to be.”

Toward the end of Mass, the current and two past SCL Community Directors blessed a Kentucky coffee tree for planting on the Mother House grounds. Throughout its history, the SCL Community has planted trees to commemorate special occasions. Blessing the newest tree were Sister Constance Phelps, current Community Director; Sister Maureen Hall (2010-2016); and Sister Sue Miller (1998-2010).

Following a celebratory luncheon featuring a menu with a Southern flare, Sisters and SCL Associates enjoyed Community videos from past anniversaries (100thand 150th) and the appearance of an SCL performing group with Lucille Ball on the “Here’s Lucy Show.” They also viewed a display highlighting selected “Moments of Grace” during the terms of the 18 Mothers General/Mothers Superior/Community Directors over the past 160 years. 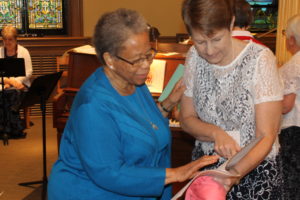 In late afternoon, guests returned to Annunciation Chapel. In front of a restored statue of the Mary, mother of Jesus, they recited a special novena prayer. This prayer dates to the pre-founding days of the

SCL Community. The statue was donated by students of St. Mary’s Academy, Leavenworth, in 1944 to commemorate the appearance of the Blessed Virgin in St. Mary Hall following the death of four students and destruction caused by a cyclone in 1882.

With love of music another SCL tradition, a program performed by John Winkels and vocalists from Holy Family Church, Kansas City, Mo., capped the 160thanniversary celebration. John is liturgy and music director of the parish.

“The 160thAnniversary Committee planned events of the day to be celebrative, entertaining and inclusive of our characteristic virtues of humility, simplicity and charity,” Sister Constance said. “Based on feedback, we met our goal with an enjoyable and memorable observance.”

Note: The Sisters of Charity arrived in Leavenworth from Nashville, Tenn., on November 11, 1858. The recent August 160thanniversary observance coincided with other events that brought a number of Sisters and SCL Associates to Leavenworth from across the United States and Peru.

Your ticket for the: Traditions Fill SCL 160th Anniversary Observance